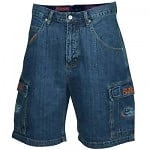 Now that summer is upon us, khakis have been jettisoned for Bermuda shorts, dresses for sun dresses, and, in some cases, jeans for jorts. We've all seen them, but have we really taken the time to understand them? Probably not, because Karl Lagerfeld and other fashionistas have never vouchsafed their time or expertise to jorts...so here we go...

Jort is a portmenteau word or "blend" word of jean and short. Jort is usually used in its plural form jorts, much like jean is usually used in its plural form jeans. There is often much confusion between jorts and "cut-offs," and although the distinction seems slight, it is an important one. Both are shorts made from a twilled heavy cotton fabric, however, teleologically they are very different. 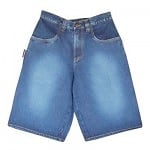 Cut-off's were born as jeans that have been retro-fitted with a pair of scissors. On the other hand, jorts were never jeans, jorts were born as jorts for only that purpose, nothing more or less. As a result, jorts have a machined hem line, and sometimes, even pleats, whereas cut-offs are unhemmed. Furthermore, because of the forward-looking nature of jort creation, jorts have come to include side pockets to accommodate the increased usage of cellphones.

It is important also to understand the cultural distinction between jorts and cut-offs. Cut-offs had their heyday in the 80's, regularly appearing in music videos of hair metal acts like Bon Jovi, Def Leppard, and Motley Crue. Jorts, on the other hand, came into popularity in the 90s, having a vogue in rap and hip-hop music videos, and being embraced whole-heartedly by southern university football fans. The University of Florida, has even commissioned a university jort with their Gator mascot emblazoned on them.

For you Hampton's goers, it should be known that to date, jorts have not experienced such a warm reception out east. Jort wearers have an increased rate of speeding tickets and arrests on the Long Island Expressway, and a decreased rate of acceptance into Bridgehampton Polo and Dune. It's a classic chicken and egg question, but instead of waiting around for the logicians to figure it out, it might be a better idea to leave your jorts in the city and pack your bermudas.