How About We got the inside scoop on How To Hook Up In The Hamptons (with a little help from our team and a former GofG NYC editor), and The New York Post questioned some Hampton Jitney riders about their hook up tactics... and we just couldn't resist! While I can't speak from personal expierence when it comes to summer share houses, because I have never lived in one before, I don't think that you have to partake in this summer tradition to know that the people who are in these homes are both looking for a good time and trying to get laid.  But how does one go about trying to seduce a fellow summer sharehouser? I would imagine the massive amount of booze, and DTF-ness would be enough...

But check out what these sly Hamptonites had to say to the Post:

Ahh... the good old "I have no where to sleep" move. I can't imagine why you would spend money on a summer home that does not actually have a place for you to sleep, but this may just be exactly why people are spending the money -- to get into somebody else's bed. 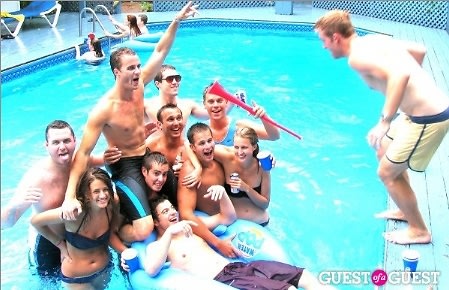 Who needs a bed? This crew just needs a float!

“Say, ‘I don’t consider it a good weekend unless I’m shaking sand out of my underwear.’ ” — Marc

Hm, hows this one working for you Marc?

Something tells me this chick is down to get sandy...

“Ask him if he wants to trade Lacoste polos for the weekend.” — Alyson

If he says yes, I am pretty sure he is looking to get with the boy down the hall, not with you Alyson. Although, I have to give you props on your sneakiness, maybe snatching an item of his to secure interaction at a later period might be a better move.

“Keep name-dropping Billy Joel. Like, ‘At Billy’s house we don’t have to take off our shoes.’ Or, ‘Billy loves tantric yoga.’ ” — Hunter

"Billy" loves when he pops bottles, especially in a bathing suit!

You might want to get the keys out, cause once you get to the house she won't want to be sleeping on your twin bed, she's going to want you in that sea plane.