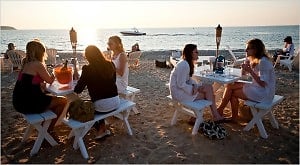 The New York Post reported about three restaurants that are sure to change the dining scene out East, including The Bell & Anchor in Sag Harbor.

The Bell & Anchor, which is inspired by Sag Harbor's maritime history, is the latest restaurant from co-owners David Lowenberg and Sam McCleland (the team behind The Beacon), and the menu will focus on seafood and steak. The space will be huge-- double the size of the Beacon-- and according to the Post, is decorated "with sea-green-blue accents and banquette and cafe-style seating."

In addition to The Bell & Anchor is Muse, from chef and owner Matthew Guiffrida. Muse will be a spinoff of Muse Restaurant & Aquatic Lounge in Water Mill, and it will be the housed in the former JLX Bistro space, which has been empty since the restaurant closed in 2004.

No word on the decor or the menu at Muse, but we do know that there will be an 8-foot-long, 4-foot-high fish tank inside the restaurant, which is as good of a reason as any to make a res. ASAP.

The third new opening is Andrra, which will be opening in the space that was formerly The Boathouse. Sami Krasniqi, Noti Kransniqi, and Rich Silver are the guys behind the new Mediterranean-style spot, and the restaurant has views of Three Mile Harbor.

All three new places are expected to create quite a buzz this summer, so get ready to make some reservations to try out some of the Hampton's best new dining options!