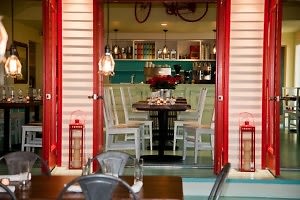 ...because every time we go, we insist to everyone we're with that it's the best meal we've had in the Hamptons. Because it has Funfetti-Carrot cupcakes. And because it encompasses everything we love about Montauk...

We've previously expressed our love for South Edison, both in a our pre-emptive excitement for its opening this summer on Montauk's South Edison Street, but also in our ten-out-of-ten review after experiencing Chef Todd Mitgang's cooking genius.  And now, with a new menu (that is apparently changing as often as the daily catch) and...weren't we excited...new dessert options, we're considering spending every remaining meal this summer at South Edison. Last night, while practically stabbing each other with forks trying to get the last bite of Red Velvet cake, we muddled over the reasons we love South Edison....

...because, hands down, it's some of the best food in the Hamptons. And we don't kid around.

...because they have Carrot Cake AND Red Velvet Cake on the menu.

...because they noticed when all four of us at the table eyed up that last piece of said Red Velvet and put a proverbial "reserved" sign on it just for us. AND they remembered how much we love their cupcakes.

...because no matter what, the staff is hospitable, the service fast, and...in case we didn't mention yet...the food excellent.

...because even hardass commenter "enoughalready" is on board. And he/she/it hates EVERYTHING.

...because the know how to make a mean Margarita.

...because there's a red bike on the wall. And we love bikes.

...because, let's face it, from the friendly service to the we-just-caught-this-fish-ten-minutes-ago menu selections, it's just so Montauk.