Happy Bastille Day!  July 14th is France's national day --  as it was once called La Fête Nationale (The National Celebration). Bastille Day, commemorates the storming of the Bastille, which took place on July 14th, 1789. This day marked the beginning of the French Revolution. The Bastille was a prison, and even though it only held seven prisoners at the time of its capture, the prison served as a symbol of the power of Louis the 16th's Regime. Therefore, storming of the Bastille signaled that the king's power was no longer absolute, freedom! Because of the excitement around this day, we put together some classic French activities and places to go to shake things up...[Photo via]

1. Throw on some classic French music on your Ipod. French music has a romantic way of making everything feel as though you are in a movie trailer. Whether you are driving or walking down the street, switch up your playlist today to a French tune, I promise you will look at things differently. Here are some of my favorite oldies but goodies,

2. Make a classic French picnic. Grab some Rose, fresh baguettes, cheese and assortment of dried sausage spend, and the afternoon (or your lunch break) on a sunny grassy spot. It may not be le champs de mars, but you'll feel just as special. If you can grab somebody to make out with while you are picking on your al fresco feast, it will make it all the more French.

3. Smoke a cigarette. Only instead of taking dirty looks from non-smokers, give them a snotty look right back, and if you can, put on a pair of French balls and blow the smoke into their face. The French don't care, the French don't give a.... You have a problem with them smoking? They got a problem with you not smoking.

4. Treat yourself to some expensive lingerie. The French chicks know that at any given moment buttons may come on done and bottoms unzipped (it is after all the country of romance). It is crucial that they are always prepared underneath their stylish threads, which is why some of the best underwear shopping in the world is found in paris. Knowing that your undergarments are just as beautiful as your new heels makes you carry yourself differently. Even if you are not planning on taking your clothes off for anybody. Take some time out of your day for you, and splurge on some sexy pieces.

5. Drink espresso and get your face up in some delicious pastries. The French are known for their great figures, but every French person I know also has a great appettite. They are those annoying people who have the ability to "taste everything, eat nothing".  For a mid-afternoon snack make a fresh espresso and nibble on a fresh French classic pastry. Think croissant, pain au chocolat (chocolate croissant), eclair, profiterole (cream puff), beignet (french doughnut), madeleines, macaroons, and palmiers. Ugh, I have officially given myself a sweet tooth. 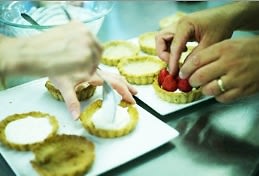 6. Party like it is the weekend. We are practically there anyway, but the French are always finding a reason to pop some bubbly and seize the day. Let's follow in their footsteps and use their freedom as our excuse to party!