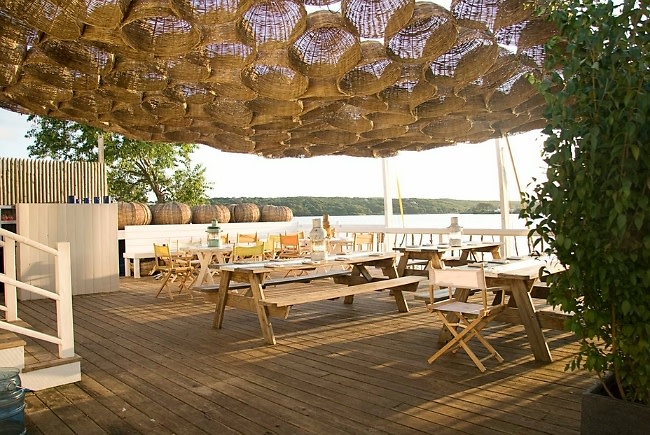 The Surf Lodge is back, and will reopen this weekend refurbished and with new owners. Previously, the new ownership, Montauk Properties, LLC, announced a more family friendly atmosphere -- but what does that really mean for the flocks of Hamptonites that travel far and wide (well, along the Napeague stretch) just to spend a night at the space? The East Hampton Star sat down with Jayma Cardoso, the "last [wo]man standing" of the original owners of the Surf Lodge to talk about the changes we'll be seeing... starting this weekend. Here are some things you should know if you plan on checking out the "new" Surf Lodge:

- The restaurant is switching to a reservation-preferred seating plan to avoid over-crowding.

- Their live music will be ending at 9 p.m. instead of midnight, as it sometimes did.

- The vibe will still be "chill" as Cardoso states in the article: “No high heels,” she said. “It’s a place where you can come in your flip-flops and your sarong.”

- The new ownership group, which is headed by the Internet entrepreneur Michael Walrath, a Montauk homeowner, is, according to Cardoso, in it for the long haul. [Source: East Hampton Star]

And those aren't the only changes -- well-regarded Chef Chris Rendell, formerly of the Highlands restaurant, is now at the helm of the Surf Lodge, and is bringing some Australian flair with him.

Former Top Chef semi-finalist Sam Talbot was the initial chef for Surf Lodge when it opened in 2008, but now Rendell has renamed the place "Byron At The Surf Lodge," referring to Byron Bay, "the ultimate surfer town," in his native Australia. He plans to base his cooking on the principals of a simple, clean, local and organic market driven menu. The restaurant will still be focused around fresh seafood, and will now feature hints of Asian influence.  [source: BlackBook]

With places like the Sloppy Tuna, Ruschmeyer's, and even more new bars like Zum Schneider, it might be a nice change of pace to experience a more mellow Surf Lodge this summer. Here's to hoping.

[Everything You Need To Know: What's New And What's Back For Hamptons 2012]

[Save The Drama For Your Mama: East Hampton Town Battles The Surf Lodge About Their Food Stand, And Sam Talbot Takes Off]