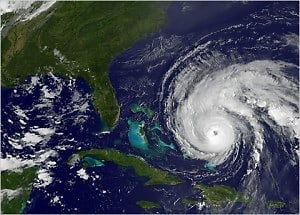 As the weekend gets closer and closer, the weather forecast gets worse and worse, thanks to our new-found mortal (or not..?) enemy: EARL. So is Earl determined to ruin our last weekend in the Hamptons?

It certainly appears that way. The National Hurricane Center has issued advisories on Hurricane Earl and it appears that many events are taking the warnings seriously; the Hampton Classic Horse Show has moved some of its Friday events to Thursday, since Friday is rumored to be the worst of it, while other Hamptonites (like us) are just keeping our fingers crossed for minimal rain. The Wall Street Journal reports that a hit on the Jersey Shore or Hamptons is "now a coin toss (50/50)." Either way, those who do brave the beach come rain or shine, should beware of likely big waves and strong rip currents.

And while hurricanes blow (ha..ha..) for many a reason, we wouldn't complain about a respite from this suffocating heat wave...according to TheFuckingWeather.com (our very favorite, no-bullshit, of course super-official weather source), "IT'S FUCKING HOT" today, and has been all week. At 92 degrees (for only noon-thirty, at that), it's almost too hot for the beach. Hmm..guess we can't win them all..