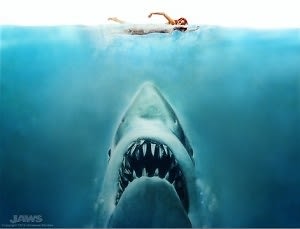 So the official Discovery Channel Shark Week doesn't start until August, but with some of the recent sightings on our beloved Hamptons beaches, we're wondering if our not-so-friendly finned friends have declared this week the unofficial Hamptons shark week.

What would summer in the Hamptons be without a shark sighting or two? In fact, last year Team GofG Hamptons spotted that tell-tale fin gliding along the waters of a beach in Quogue.  But this year, or even just the past week or so, it's beginning to feel like we've stumbled across a scene from Jaws.  Who cares about celeb sightings...this week it's all about the SHARK SIGHTINGS.

We first heard of the sighting this weekend from a couple local surfers in Montauk.  While they sat unfazed by the news (and actually a little pleased with the effect it may have on the popularity of the beach), we non-locals are still quite hesitant.  Veteran lifeguard Bob Miller told the East Hampton Star,

"It was like he was chasing a fish, a bass, and right at the beach it made a sharp turn and we could see its body, huge. I’ve never seen anything like that."

The shark was estimated at around 12 feet in length.  Translation: big enough to eat you. 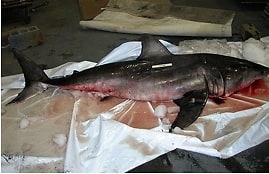 The Star Island Shark Tournament is a reminder in itself of how many sharkies there are swimming out in the ocean.  At the event last week, an angler accidentally reeled in a Great White weighing it at an estimated 300-400 pounds.  Great Whites are off-limits according to the Magnuson-Stevens Fishery Management and Conservation Act, but this guy failed to release his catch back into the waters.  I mean, aside from that whole illegality/animal cruelty thing, we're not exactly complaining.  Other tournament participants contributed to (legal) shark populations control as well. According to 27East:

"The overall heaviest shark caught during the two-day tournament this weekend was a 335-pound thresher, which brought with it a $25,000 prize."

I think we need not reiterate the above translation...let's just say, those are some big sharks.

All this shark news almost makes us yearn for the days when this guy was the scariest thing to wash up on the Montauk shores...