Last week two popular beaches in West Hampton were closed due to shark sightings. Although officials say that the sharks (which measure up to be 15-20 feet in length) are not a danger to humans, it freaked out beach goers. There were about fifty people splashing around last Tuesday afternoon when the "friendly" sharks were spotted. Restaurant developer Andrew Moger, of Manhattan, told the New York Post,

"They were so close in the surf, it was incredible. But I have to say that I won't be rushing off into the water anytime soon." 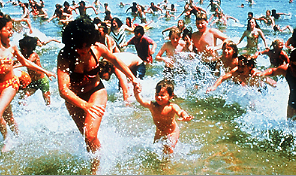 Authorities were notified by residents who spotted large dorsal fins slicing through waters off Cupsogue Beach.

"I am so impressed with how close they are to shore, and you see this big fin coming up and going down again and they're going back and forth, back and forth," said beachgoer Pat O'Malley [via]

"Impressed"? There's an interesting word choice. Every article I have read on these sightings has said things along the lines of "plankton eating visitors" or "basking sharks, not dangerous to humans"

However, I wore goggles in the shower for a month after watching 'Jaws'. I am the doofus who panics on a boogie board at the sight of seaweed shadows in the waves. I do not care if I am not on this creatures menu - if a dorsal fin pops up next to me with a 30 foot body attached to it, I wouldn't need a bite and loss of blood to do me in, I would probably have a heart attack just seeing the damn thing. What do you think about these sightings? Are you going to be thinking twice before jumping in the ocean this summer? 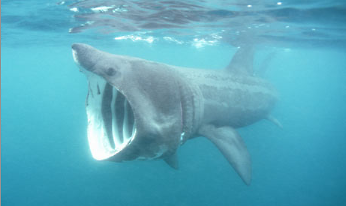 A "friendly" Basking shark [via]