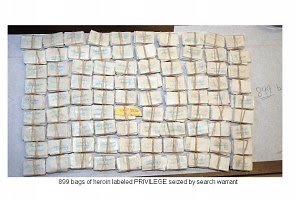 A recent drug bust on the East End has reminded us of the dangers of dealing illegal substances, as well as presented us with a pretty solid guide to what not to do when running a Hamptons heroin ring.  Here's a rundown of the lessons we've learned from the 20 sorry souls who got caught.

Or at the very least invest in fake floorboards, hidden under-the-mattress compartments, trap doors, or any of the other various money-hiding furnishings that bank robbers use in the movies.  At the time of the raid, investigators confiscated over $170,000 in cash "hidden" in various places around their home.  Piles of money were found scattered under a nearby nightstand, on top of a desk, tucked inside some clothes, and sitting on a bedroom floor.  On the floor?  Come on, people - you could be making interest on that hard-earned cash!

Get inside the mind of your consumer.

As a drug dealer, what does your consumer want? To get high, sure.  But a supplier must always keep in mind what message they're sending to their customer when naming their product.  The better the packaging, the more sales!  Google, President Privilege, True Religion..they're all pretty tame for drug labels.  But Quicksand?  A little scary.  Or what are customers supposed to expect with Hell on Earth?  You won't be enticing your average Hamptons party-goer to extend their experimentation to heroin with a name like that!

And remember kids...Just Say No

In case you need to be further convinced that "drug dealer" maybe isn't your best career choice, Suffolk County District Attorney Thomas Sporta wants to show you all the horrible consequences of operating such a business:

"There's no better illustration of the profits to be had peddling heroin than the amount of cash Task Force detectives found scattered throughout 15 Albright Drive in Coram."

Right.  Because a copious amount of cash is such a deterrent.

And just to be clear, we don't condone any such behaviors, and couldn't be more pleased that we can now spell 'Hamptons' without the Capital H.