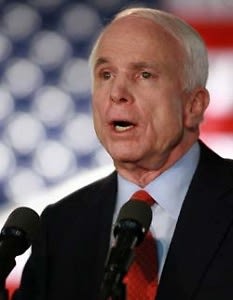 The GOP nominee came out east this past Saturday, and, in case you were too busy pretending to watch horsies to shell out the $2,300 to hear him speak, here's what you missed:

What: A benefit dinner-cum-sermon to the choir by the Republican hopeful

Where: The Water Mill Estate of real estate developer Bill and Phyllis Mack

Iran- "The Iranians are on the path to developing nuclear weapons, that everyone agrees on, including the IAEA. They pose a threat to the region, not only the state of Israel, but every nation in the region would feel they need nuclear weapons as well if the Iranians acquired it [sic]."

On our European allies: "I'm happy to say that Sarkozy and Gordon Brown are interested in joining forces with us in enforcing and enacting meaningful and tough sanctions we cant get done in the security council because of Russia."

On books: "I read anything by Hemingway all the time. He's my favorite author."

On finances: "I'm happy with the money that we've raised."

On Obama -"I think that Senator Obama ran an incredibly admirable campaign."

On the presidential race: "I like being the underdog... I think we can prevail in a long, hard, tough campaign."