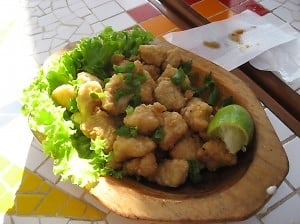 It's early Spring... the season of soft-shell crabs, asparagus, rhubarb and berries. But for the famous seafood shop in between Amagansett and Montauk called The Lobster Roll (most commonly known as "Lunch") something else is in season... a specialty dish unique to The Lobster Roll called "Puffers." So what are these scrumptious treats? They are literally the tail portion of a blowfish, battered, deep fried and served with tartar sauce and (if you ask nicely) malt vinegar. But hurry up! Puffers are only in season for about two more weeks! Unfortunately, this may be the only dish I look forward to at The Lobster Roll. I find the lobster rolls, the steamers, AND the new england clam chowder much more tasty across the street at "The Clam Bar." However, if you haven't tried the Puffers at The Lobster Roll, it's definitely worth the trip.