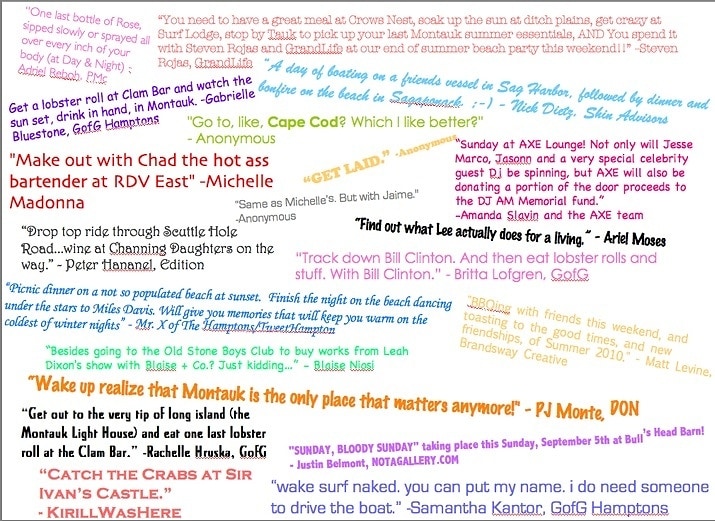 This is it. The last weekend of summer. Earlier this season, we gave you your summer 2010 bucket list. Didn't quite finish all those to-dos? Well there's still time for ONE. FINAL. HURRAH. So, how do you end another summer in the Hamptons?

"One last summer hurrah for me is BBQing with friends this weekend and toasting to the good times, and new friendships, of Summer 2010." - Matt Levine, Brandsway Creative

"Get a lobster roll at Clam Bar and watch the sun set, drink in hand, in Montauk." - Gabrielle Bluestone, GofG Hamptons 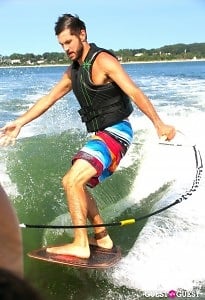 "To make out with Chad the hot ass bartender at RdV East." - Michelle Madonna

"Mine's the same as Michelle's. But with Jaime." -Anonymous

"Wake surf naked. You can put my name. I do need someone to drive the boat." -Samantha Kantor, GofG Hamptons

"The perfect last summer hurrah would be a day of boating on a friend's vessel in Sag Harbor, followed by dinner and bonfire on the beach in Sagaponack." - Nick Dietz, Shin Advisors

“You need to have a great meal at Crows Nest, soak up the sun at ditch plains, get crazy at Surf Lodge, stop by Tauk to pick up your last Montauk summer essentials, AND You spend it with me and GrandLife at our end of summer beach party this weekend!!” -Steven Rojas, GrandLife

"Sunday at AXE Lounge! Not only will Jesse Marco, Jasonn and a very special celebrity guest DJ be spinning, but AXE will also be donating a portion of the door proceeds to the DJ AM Memorial fund.” -Amanda Slavin and the AXE team

"So the one last thing any "Hamptonite" should do is wake up realize that Montauk is the only place that matters anymore!" - PJ Monte, DON

“Picnic dinner on a not so populated beach at sunset. Finish the night on the beach dancing under the stars to Miles Davis. Will give you memories that will keep you warm on the coldest of winter nights.” - Mr. X of The Hamptons/TweetHampton

“Get out to the very tip of long island (the Montauk Light House) and eat one last lobster roll at the Clam Bar.” -Rachelle Hruska, Guest of a Guest

“Track down Bill Clinton. And then eat lobster rolls and stuff. With Bill Clinton.” - Britta Lofgren, Guest of a Guest Hamptons

"Find out with Lee actually does for a living." -Ariel Moses

"The last thing I would do is drive to Lobster Roll on the Montauk Highway Express and order that + a root beer float." - Soraya Darabi, Foodspotting

"One last delicious BBQ Chicken Quesadilla from Turtle Crossing....mmmm; one last belly flop into the pool; one last bottle of Rose...sipped slowly from a glass or sprayed all over every inch of your body (at Day & Night); one last day of event hopping, while attempting to change outfits in the car in between (even if you drive a Mini Cooper); one last night at Dune." - Adriel Reboh, PMc

"One last game of cornhole on the lawn!" -Ricky Van Veen, CollegeHumor

"Take the dusty old bikes you found in the basement of your share house, light them on fire and ghost ride them into the ocean!" -Dennis Crowley, FourSquare

Between all these fabulous suggestions and the Labor Day Weekend Party Guide, better get to work...! And, of course, thanks to all for an AMAZING summer. xoxo, GofG Hamptons