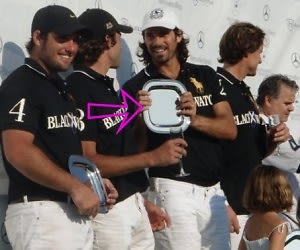 [Nacho Figueras. Photo via bigshotartist] What we thought was just another day at the tents during week three of the Mercedes-Benz Polo Challenge was quite the opposite for Amanda Taft, an LA-based blogger whose first visit to polo (and the Hamptons) quickly turned from disaster to Best.Trip.Ever. It all started with the decision to cab it to Blue Star Jet Field (she admitted that was a rookie move on her part) which obviously landed Amanda, with three girlfriends in tow, stranded at the field entrance by the time all the fun came to an end with no cabs in sight. As they watched the entire parking lot empty, with not one Polo-goer willing to offer up a ride, Nacho Figueras arrives to save the day and the story only gets better from here...So everyone attending the match left the girls for stranded while the polo star stopped to make sure the girls were "ok" right before offering them a ride. The four girls piled into "Mr. Polo's" Audi squeezing into the back seat next to his daughter. Not only did the absurdly handsome Nacho come to the rescue while driving off with his daughter and four complete strangers, but he gave the girls his trophy from Saturday's match! Cue the "OMFGs" right now and Go HERE for the full story that seems too unreal (and hilarious) to be true.