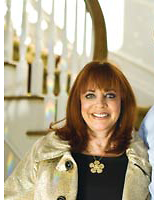 The Palm restaurant must be used to a few nit-picky patrons once in a while - with wealthy clientele, you're bound to encounter those who demand that their dining experience be nothing short of perfection. But this Westchester resident took crazy to a whole new level last Saturday...

...according to the Post, which obtained a report from the East Hampton Police Department, Amy Paul, a wealthy Westchesterian who apparently thinks she's far more important than she actually is, went all batshit at The Palm on Saturday when the service wasn't up to her standards.  Her standards were, of course, ensuring that she did not wait for her table to be prepped, even though she was twenty-five minutes late for her reservation and showed up with four extra people.  What, that's not how you define good service? Pshhhhh.

After being told she'd have to wait, Ms. Paul "became irate and ripped pages out of the reservation book and then removed her shoes (heels) and went outside and began breaking the landscape lighting with her shoes until family/party members stopped her and removed her from the property."

SERIOUSLY. EH Police are trying to be in touch with the headcase, but she's attempting to shut them up with dollar bills instead. Honey, take a lesson from the Countess..Money Can't Buy You Class.