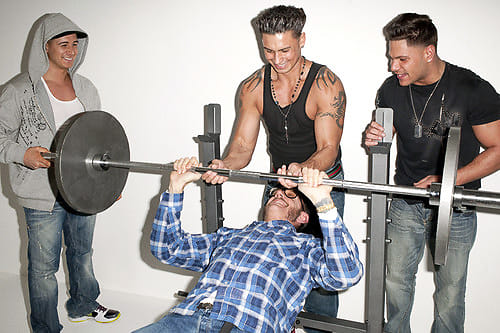 A series of unfortunate incidents at the various fitness centers I frequent has led me to the conclusion that the world is in dire need of a gym etiquette refresher. Something that would be mandatory to commit to memory upon gaining admission to a gym…or, most notably, the gym locker room. So, in an attempt to safeguard our senses, I figured I would give it a go.

[Even Terry Richardson gets his work out on with the Jersey Shore cast... Photo via]

It’s often incredibly difficult to muster up enough motivation to make it through an hour on an elliptical or a treadmill. Especially on a beautiful Sunday morning after an evening of fun (fun is code for cocktails). These machines are fifteen shades of instruction manual-boring, but we utilize them so as not to slowly morph into our fat (and possibly evil) twins. While we’re being responsible and making the commitment to torture ourselves for a desired amount of time, we’re basically held hostage by our determination to not look like a Xantrex “before” model.

So, you’re on the (insert stationary torture device here), and in walks Johnny Biceps, and hops on the machine directly next to you. As if his muscle shirt wasn’t offensive enough, he has taken the initiative to offend more senses by bathing in enough to cheap cologne to drown an African village. In gyms, olfactory terrorism (or Axe-bombing, as I call it) as an assault mechanism is more common than type-A aggressive narcissism. 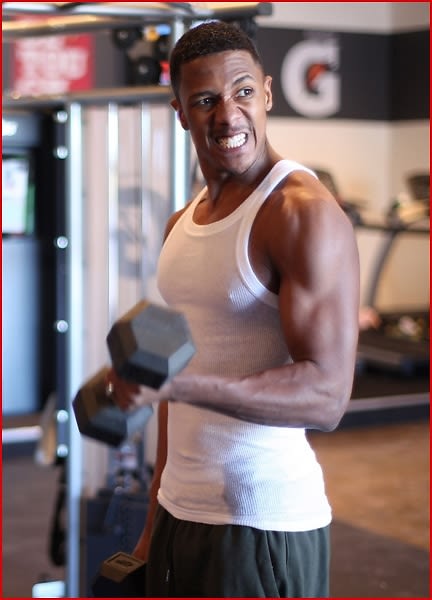 The Axe-bomb is unacceptable anywhere, but especially in a confined area such as a gym. This type of behavior should be punishable by having one’s membership revoked. The bottom line is: keep the cologne and/or perfume at home. While you may enjoy smelling like a truck stop air freshener, the person trapped on the elliptical machine next to you may not. Whatever you do, be careful not to take this rule to the extreme and go the opposite route, sans deodorant. Body odor is just as offensive as suffocating someone with a perfume-based assault on their sinuses.

At this point, your visual sense is probably starting to feel smug that it has remained un-assaulted at this point in your gym experience. Don’t worry, the moment you step into the locker room, it will be knocked off of its lofty high horse. As a woman, I can’t speak for the situation in the men’s locker room, but if it’s anything like the woman’s locker room after a “gentle” yoga or “easy” spin class…yikes. Now, I have no problem with nudity with respect to the ages of gym-going exercise devotees. Gravity happens. What I do have a problem with is a lack of modesty that borders on pornographic. I can’t tell you how many times I have been putting my shoes on while seated at a locker room bench, only to have a naked woman (almost always someone that would qualify for an AARP benefits package) bend over in front of me for an extended amount of time. Call me old fashioned, but there are just some things that one should not be exposed to. Someone else’s cervix in a locker room being one of them. Unfortunately, these aren’t isolated incidents, either. I believe that Tim Allen once said there was both “good naked” and “bad naked.” In my ever so humble-yet-outspoken opinion, any sort of bending-over and/or crouching while dressed in your finest birthday suit is at the top of the “bad naked” list. Be naked all you want; after all, it is a locker room. Just remember, you’re not there for a pap smear, so keep your knees together and your posture vertical…also, you’re not on vacation at a naturalists’ spa, so try and expedite the dressing process. 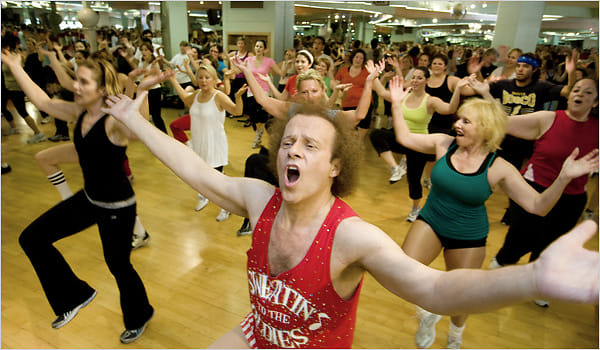 [You may feel fabulous after sweatin' to the oldies, but let's keep it PG people. Photo via]

If you don’t want to be the subject of unfriendly gym gossip, or possibly the subject of someone’s tumblr account (thanks, cellular technology), let these rules marinate in your conscious brain and adapt them into your fitness routine. Now that you have been made aware of your egregious errors against your gym-going peers, if you keep perpetuating the vicious cycle of visual and olfactory assault, you’ve crossed the line from ignorant to full-blown jerk; and no one likes a jerk.