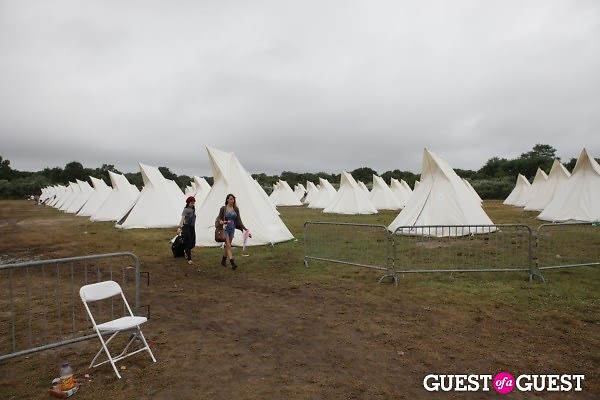 This past weekend at the Escape to New York festival, I was introduced to glamping, an activity that tries to take all the awesomely dirty and disgusting things about camping and replace it with pretentious bullshit. No, I don't want to sleep in a king sized bed fitted in Egyptian cotton in some elaborate tent in the backyard of an Elks Lodge. I am here to listen to rock music and get dirty, if I wanted to live in the lap of luxury, I would go and stay in a five star hotel with excellent service and actual amenities.

[Yeah, that grass is still muddy, I don't care how much you paid for that tent.]

What was the going rate for these handy dandy little tents? Like we mentioned before, $3,500 for one of these suckers on route 27. But it comes with free Arizona Iced Tea, I mean, that's pretty classy if you ask me.

One person we talked to stayed in the Krug Champagne tent, and eventually had to leave because she hated it so much. Coco Rocha, on the other hand, seemed really into it, she uploaded this photo of herself... 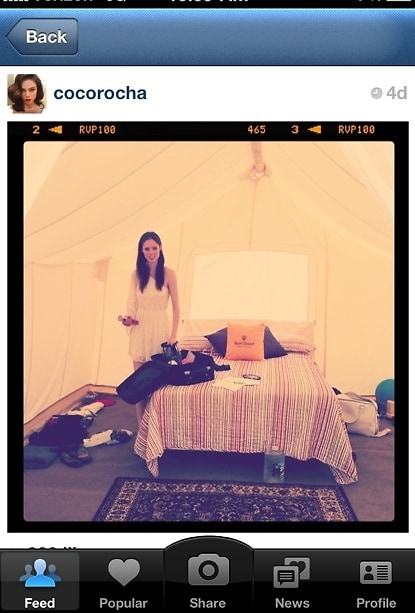 But I mean, hey, let's put this all into perspective, maybe I'm just being a little high strung on this whole thing. Coachella also had a "Safari tent" glamping option that was similar to the safari tents at Escape to New York. The Coachella safari tent costs $5,000 (+ applicable charges) for the first 2 people and $1250 for each additional person to stay in your tent. Quite the pretty penny if you ask me, but it's also freaking Coachella.

Escape to New York safari tents cost $3,250 for two people and $3,950 for four. If you were unfamiliar with the lineups of the two festivals, you may say hey, that's not too bad, Escape to New York seems like a bargain. Guess again. The lineup at Coachella included names like Kanye West, Ellie Goulding, Animal Collective, Arcade Fire, Mumford and Sons, Afrojack, Kings of Leon, The Black Keys, just to name a few. Escape to New York had a fraction, and I mean a small fraction, of the amount of performers and headlined with performances from Edward Sharpe and the Magnetic Zeros, Patti Smith and Of Montreal. (Keep in mind, the third day of Escape2NY didn't even happen, so Of Montreal never even performed.) Don't get me wrong, these are great names but it totally was not even close to the same level of badass when compared to Coachella. The fact that I'm even comparing them is offensive. Not to mention the Safari tents at Escape2NY didn't even have air conditioning. Three grand and no air conditioning? No thanks. 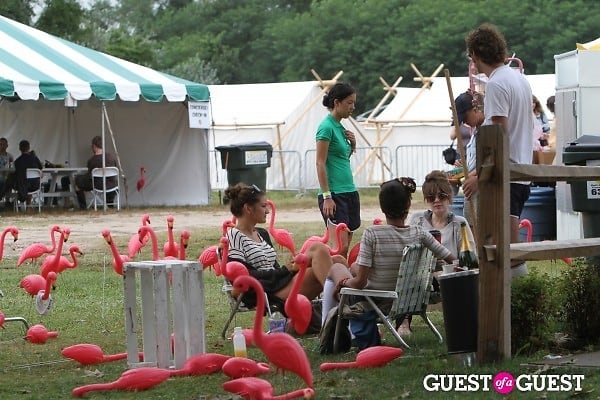 Hanging out glamp style at E2NY.

If I want to go camping, I want to sleep on the ground, in an itchy sleeping bag, eat cheap, processed foods and drink lots and lots of beer. That's what camping is. Camping is fun because you're dirty and haven't showered in three days and are constantly inebriated. 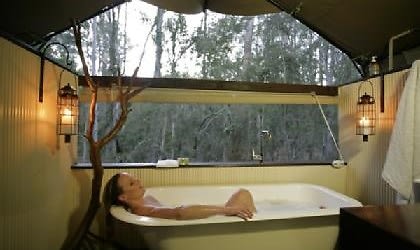 [Photo via] Yeah, this was cool until bugs starting swarming around you and floating in the bath tub. Ew. Or a bird poops on you. Didn't think about that, did ya?

Glampers are merely trying to be someone they are not. If you are high maintenance and don't like animals or calorie packed food, don't go camping. Go stay at the Ritz Carlton where you belong or an all inclusive resort in Turks and Caicos sounds more your speed. You can afford to vacation in the "wilderness" like Ibiza or Fiji. Let us regular members of society settle for camping in a tent we bought at Target in the Poconos. 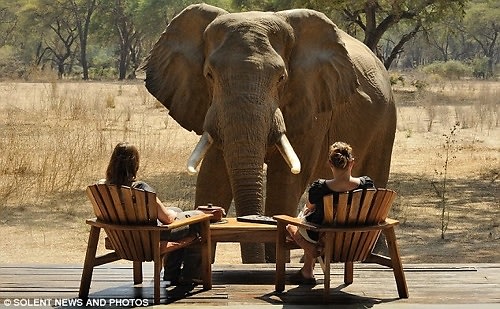 I personally would not like to have my morning chatter interrupted by this beast. [Photo via]

Glamping Girl gives the "history" of Glamping. I don't know how reliable these posers are, but I'll let you be the judge. They claim that it all started in the early 1900's with rich families going on safaris. For those who "weren't eager to part with the creature comforts of home" stayed in tents with Persian rugs and a staff of chefs and butlers.

While this may all be true, let us keep in mind that the hospitality industry of the early 1900's was nothing like it is today, so essentially, glamping sounded like a better option. But we have evolved, and our options as far as vacationing are many, so get off your high camping horse, go make a s'more and stop this glamping nonsense.