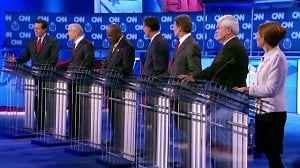 Another week, another GOP debate! Last night was the Ninth Republican Party Primary Debate hosted by CNN and the Western Republican Leadership Conference, and moderated by CNN's Anderson Cooper in Las Vegas. Here's everything you need to know that happened.

Michele Bachmann, Herman Cain, Newt Gingrich, Ron Paul, Rick Perry, Mitt Romney, and Rick Santorum participated. (Jon Huntsman boycotted the debate citing Nevada's refusal to move its caucus date to a later time in order to allow New Hampshire to hold the first one of 2012. Huntsman's campaign is based in NH.) Things heated up pretty quickly between the candidates, with Mitt Romney getting Rick-rolled-over by both Perry and Santorum, and Cain's 9-9-9 plan was a nice punching bag for a good 20 minutes at the start of the debate. Here's what you need to know from last night's debate!