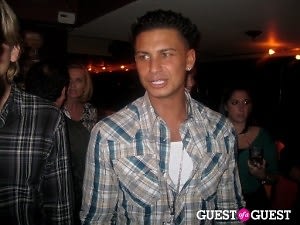 Last night MTV "toasted to their success" (aka Jersey Shore ratings) by throwing a little shindig for their employees. The event took place at Providence in Hell's Kitchen. Everyone from big-name execs Stephen Friedman, Tony Disanto, and Liz Gately to the young, diversely hip crew were fist-pumping in full force. However, the evening's star attraction was none other than Jersey Shore's Pauly D.-

We pulled our favorite guido aside before he hopped on the 1s and 2s. 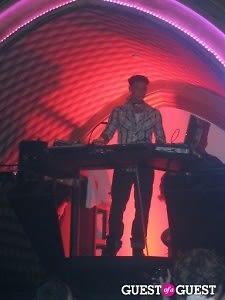 "Do you guys cover Jersey?" he asked me, following a limp handshake. I said we haven't expanded to Seaside Heights quite yet. "But you're gonna write about DJ Pauly D, right? Tweet me! What's your Twitter name? Mine's 'DJ Pauly D.' Can your server handle it though? When I tweet sh*t, servers blow up."

Pauly D smoothed up a lock of his trademark, gravity-defying, product-infused mane. "I mean, I'm on MTV for God's sakes!" he told me excitedly. "And the best part of tonight? Well...." He smiled cockily and shrugged. "Me, baby, me. Feel this!" He grabbed my wrist and placed my hand on his stomach.

I prayed no one would see me and assume I was "DTF," feeling up Pauly D in the club. Admittedly though, his abs were rock solid.

And then, just like that, Pauly D left me in a cloud of hairspray and cologne as he made his way to the turntables. He kicked off the night with his own classic, "Beat Dat Beat." 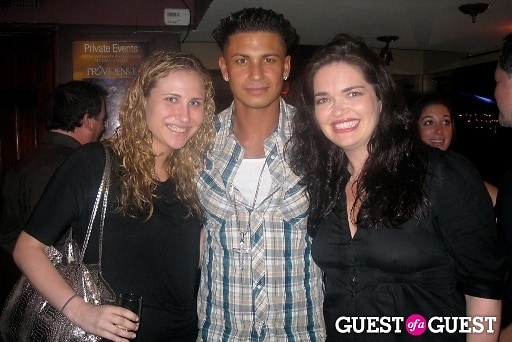