In honor of tonight's long-awaited Jersey Shore Family Vacation premiere on MTV, we've decided to dig up this blast from the past article circa July 2010 to help you celebrate the reunion right.

With the premiere of the second season of Jersey Shore upon us, we thought it fitting to prepare ourselves for this monumental event. So, we hit the tanning booths and grabbed our favorite Ed Hardy shirts, trying to plan our very own Jersey Shore party...

The Jersey Shore crowd likes to go hard so start practicing your kissy faces and flexing in the mirror. If you haven't been keeping up with your GTL routine (Gym, Tanning, Laundry), then go climb up that stair master, hop in that spray tan booth and hit up your local laundromat. Don't worry though, we've assembled the perfect Jerseylicious party guide for you and your friends! 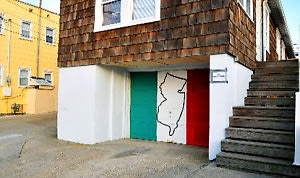 Location: If you can't make it to the shore, then party in the style of some of your favorite Guidos/Guidettes. You can take the party to your parents basement or your local bar where a fist fight is sure to break out. Just refrain from punching girls in the face, please!

-Guests: Guests have to pass the tan-o-meter test before they can enter the party: they have to reach "Tan O Rexic" or no entry. The guest list should include the hottest Guidos and Guidettes and juice-heads around.

Food: Be sure to serve Snooki-inspired pickles and JWoww's drunk munchy of choice- ham. Oh, and don't forget to have your trademark Italian boy have his mom whip up an Italian feast!

Drinks: Make sure to pre-game hard enough before the party but be sure to save room for some "Ron Ron Juice" to fuel the fire for a bar fight later on. Also, make sure you have plenty of bottles of vodka on hand for a little late night hot tubbing. You can even get creative and make your own protein shake infused cocktails.

*Blend well for a filthy night!

Dress Code: Rock that Ed Hardy and Affliction all the wayyy and guys, you'll be good to go! Now ladies,  JWoww has a new clothing line, Filthy Couture, if you're willing to shell out $300 for a lacey dress that'll barely cover your privates. When in doubt guys, just just oil up those abs and go shirtless, but don't forgot to spike that hair! If JWoww's style isn't your thing, then put on your finest animal prints (make sure it's skin tight) and tease that poof until it touches the roof!

Music: You WILL play the official Jersey Shore Soundtrack AND "The Situation's" single, titled "The Situation."  If all else fails though, just put on anything with a sick beat that you can fist pump to.

9. Pump It Up [Explicit]- Paul Oakenfold

10. I Like That- Richard Vision & Static Revenger Starring Luciana

Now that you know the rules of the guido-liciuos game, go out and fist pump with the best of them!

IT'S JERZDAY, let the fist pumping begin! The #JSFamilyVacation 2-hour season premiere starts TONIGHT at 8/7c on @mtv. Buckle the f*** up for the vacation of a lifetime. 💪🌴
A post shared by Jersey Shore (@jerseyshore) on Apr 5, 2018 at 5:00am PDT