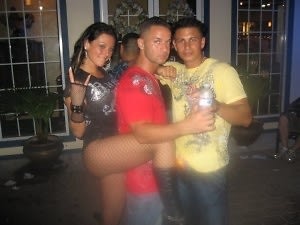 After 162 hours of longing (for those doing the math, we watched the two hour premiere three times in a row) we were finally graced with another helping of what has quickly -and rightfully- become a national phenomenon, MTV’s “Jersey Shore.” So what has become of our favorite Guido’s and Guidette’s this week? Allow us to recap.

And again, these quotes have not been altered one bit.

The show opens to Pauly D and Ronnie- both shirtless, natch- enjoying a breakfast of what one can only assume is human growth hormone and Ed Hardy brand cereal. Joined by JWoWW, fresh from her water and ham induced slumber, who appears unable to recall the events of the evening before, which included a very public makeout session in the club with a shirtless Pauly D that made its way down past his rhinestone encrusted Cadillac belt buckle. Pauly D, ever observant, doesn’t buy her ruse. “She just doesn’t wanna feel like a trashbag ‘cuz she got a boyfriend and she kissed me wit’ da tongue.”

Meanwhile, Ronnie, Sammi Sweetheart, and Mike “The Situation” all have to work a shift together at the Shore Store – AWKWARD! But before we get into this low IQ love triangle, we’ve got to ask, what’s up with Sammi’s work attire? She shows up in a plain black tank top (Did these people pack anything with sleeves?) but is soon seen sporting a tank that touts “50% Italian, 50% bitch, 100% late” with the back reading “Shore Store Whore.” Is this something she chose to wear? Is this her punishment for being 6 minutes late to work? How is this not against every single workplace sexual harassment guideline?

Regardless, The Situation, who we came to love last week, is clearly unsettled by the Sammi /Ronnie coupling, despite the fact that he “could pretty much have my choice of pretty much anybody down here.” But we gotta say, Situation, you’re pretty much acting like a little bitch about it pretty much.

Back at the house, Snookie- who has changed from the pink Ed Hardy hat that she apparently sleeps in to a pink trucker hat that reads “Pornstar In Training” and a tanktop stating “Ripshit At The Shore”- entertains Pauly, Vinnie, and JWoWW with her faux-fellating pickle fetish. “Yo, seriously, she’s on like a whole ‘nother level with pickles.” Ronnie and JWoWW have a heart to heart, since JWoWW is apparently Ronnie’s “go-to girl, like, I’m gonna, like, come to her when I need her for any, you know, kind of relationship stuff,” where he shares that he revealed his deepest, innermost feelings to Sammi. “I was like honestly like you’re awesome. I was like you make me laugh, I was like, I was like, we have a good time together, you know what I mean?” 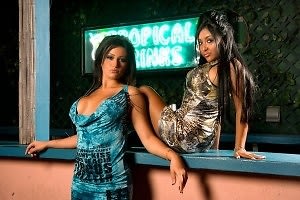 JWoww’s boyfriend Tommy comes to visit her with a dozen roses in tow, and save for the requisite douchebag tribal t-shirt and chinstrap, he actually seems to be a pretty good guy, though Pauly “think(s) he’s kinda a sucka’ if ya ask me.” Angelina also has some guests, her two friends named- seriously- Elena and Alana. After another horribly awkward conversation on the duck phone with her boyfriend, Angelina decides to invite him out to the Shore as well. There’s an extended montage of the gang grooming, mostly shirtless, for the evening out at a club called Headliners. “I’m lookin’ to have more of a classy night tonight,” exclaims Vinnie as he dons a shiny purple tie and a new pair of oversized nighttime sunglasses.

Amidst clips of Snooki dancing, which frankly, we just can not get enough of, Angelina’s boyfriend arrives and things are immediately uncomfortable between them. Perhaps it’s because, as we come to find out, HE’S MARRIED. They get into a fight, and apparently decide to break up right there at the bar. “I was really, um, upset about how the night ended, and I was just, like, you know, I can’t take this anymore.” JWoWW’s boyfriend meanwhile gives her a mandate that if he ever finds out she’s done anything with another guy that they’re over. Considering her past with Pauly’s pierced penis, this is something that lays heavy on her heart, which she explains to us through one of those “I’ve taken enough pills to forget about what happened with my stepfather” gazes often found on strippers and go-go dancers. “I didn’t tell Tommy what happened with, uh, Pauly, like it’s just not worth, you know, losing him.”

Over breakfast the next morning (“Look at dese pancakes. Whut’s upp.”) the topic of conversation amongst everyone, including the stumpy little guido that Snooki apparently took home and a shirtless Ronnie, is the drama between Angelina and her boyfriend. “When JWoWW told me that Angelina’s boyfriend was married, I kinda was like, no waaay, like, Angeliiina, like, what are you doing?” Angelina, who suddenly has a mysterious cough, decides she just can’t make it into the Shore Store today, despite it being her and Vinnie’s shift. “I’m like, I really don’t wanna work today. I just don’t. want. to. do. it… I don’t have to do what I don’t wanna do. That’s it.“

This leaves Vinny all alone to work his magic at the Shore Store. “Yo, wanna buy a shirt today? This store has like, the most, out of all the stores on the boardwalks, like, the most hilarious shirts.” Angelina’s finally showing up two hours late with a litany of excuses leads to a hilarious confrontation with Samson, Shore Store co-manager and apparently the sole black guy on the Jersey Shore. “I don’t feel good, honestly, like, I’m sick, when you’re sick, like, honestly, like … c’mon, like, you’re not getting it, like, are you getting it right now? You’re not getting it.”

After a yelling at by Danny, owner of both the house and the store, in which Angelina, much like a six year old, refuses to come out of the bathroom much less answer, she decides to literally repack her trash bags and leave. She reveals this to the group at the dinner table, where everyone, including a shirtless Ronnie, seemingly couldn’t care less. “If you’re that stupid that you wanna leave the Jersey Shore in the summatime I’ma let ya leave. Angelina like wanted us to beg her to stay, but I don’t think anybody’s gonna do that. More like goodbye, good riddance” Well said, Pauly D, well said indeed.

JWoWW decides to come clean to her boyfriend about Pauly, which results in the duck phone being hung up upon. After being comforted by her roommates (“Yo, you a’ight? You’ll be a’ight”) she takes this as her sign that she’s supposed to be single. “I’ve been like fuckin’ Suzie fuckin’ homemaker over here, I’ve been, uh a nun, a Catholic nun... Time to show my true side, my true dirty, filthy, fucking side.” Speaking of her dirty, filthy side, what the hell is that huge white stain on the back of JWoWW’s sweatpants?

So now with all relationships in the house out of the way it’s time to let loose. Snooki, who we’ve come to love (and as comedian Nick Kroll’s alter ego Bobby Bottleservice puts it “whose body is beautiful like she has been smooshed down to the size of a bowling ball that is tan with extensions and fake nails”) brings her “wild friend” Ryder along for the ride. While Sammi and Ronnie are off on a mini-golf and go-karts date for which it’s apparently necessary for Sammi to pack her birth control, Snooki and Ryder hit the hot tub with the rest of the boys. The hot tub session leads Vinny to sport yet another pair of gigantic nighttime sunglasses and The Situation to pop the plastic cork off a bottle of Korbel, and soon Snooki and Ryder are in a hardcore make-out session.

Snooki then turns her attention to The Situation, since “Mike can be a nice guy, like, he shows his good side then he shows off his jerk-off side. And that’s what I like, a good guy and a jerk off. It’s all in the same.” While things are getting crazy on the roof, things are getting cozy between Sammi and Ronnie in the downstairs bedroom, revealed to us in the weird Paris Hilton-porn raccoon-eyed night vision.

Ronnie once again takes the award for this week’s most unintentionally self aware analogy when he says of Sammi, “At first, I was like, I’m not gonna shit where I sleep, but, I mean, fa’ her, I’ll roll around in shit all day.”

After nearly burning down the house while attempting to grill, our intrepid gang heads back out to Karma for a night of house music and fist pumping. (Seriously, JWoWW, where the hell do you shop? You manage to pull together some outfits, like this evening’s particular acid washed jeans and slit spandex top ensemble that would make an Eastern European hooker blush.) Though Sammi and Ronnie seem to be eternally blissful (“Honestly, I thought this shore house was the best thing to ever happen to me, but you are. You are.”) but this being the Jersey Shore, things are never so simple. While Vinnie and Ronnie are on the dancefloor (“I break it down dancing. I love the beats, I got my creepy patent moves. I don’t even know where I learned to do this, I just rock that shit out.”) Sammi ends up giving her number to another guy in full view of JWoWW. A jilted Ronnie leaves and sulks home, shirtless, which sends JWoWW after him. As the credits roll we see Sammi Sweetheart and her big ole’ thighs storming to confront them.

So what will happen next week? Will Sammi step to JWoWW and “knock a bitch up”? Will Vinny ever have a plotline? And why oh why does Snooki get punched in the face?? Regardless of what happens, rest assured we’ll be here to bring it to you.