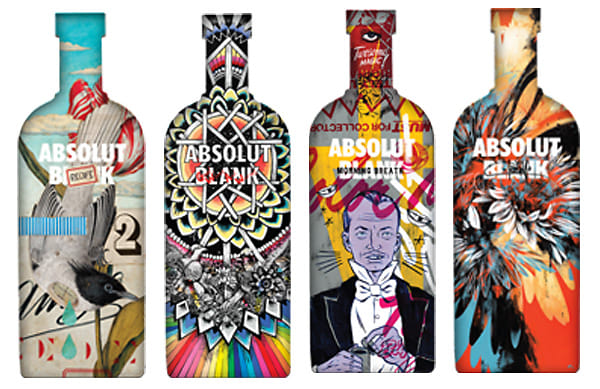 Vodka is, by design, a neutral spirit. Essentially, this means that the better the vodka, the less you're supposed to taste anything, and this is why the most expensive brands in the world emphasize purity, smoothness and filtration as their claims to fame. But while you might think that this means the packaging of vodka should also reflect this neutrality, that's never really been Absolut's bag.

Already well-known for their city-specific custom flavors and the infamous disco bottle, the Swedish mega-brand is now set to take it to the next level with Absolut Blank, a limited run that's allowing an impressive collection of the world's hottest young artists to treat their signature bottle as a blank canvas. 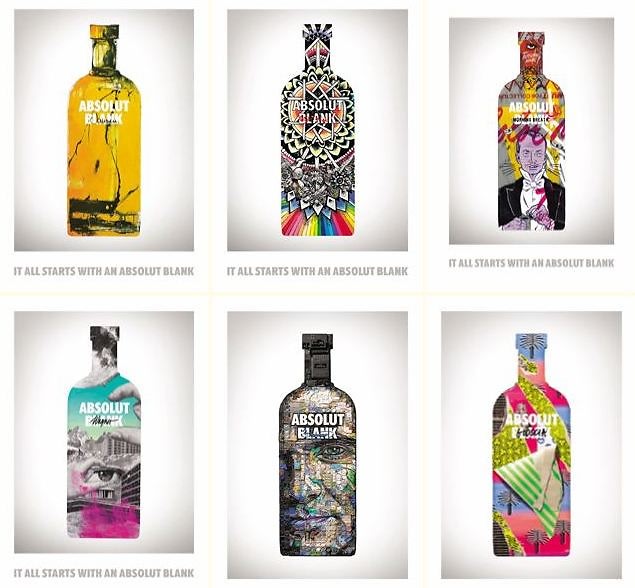 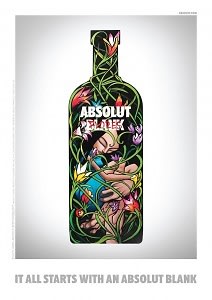 The inaugural line, which has already seen a major ad push in the UK and should be on L.A. billboards quickly, boasts some major artistic star power, including Adhemas Batista, Aestethic Apparatus, Brett Amory, Dave Kinsey, David Bray, Eduardo Recife, Fernando Chamarelli, Good Wives & Warriors, Jeremy Fish, Ludovica Gioscia, Marcus Jansen, Mario Wagner, Morning Breath, Robert Mars, Sam Flores, Thomas Doyle, UVA and Zac Freeman. And according to the promotional materials, the artists were essentially given complete creative freedom. Now, it doesn't appear that anyone attempted to push the limits of that freedom too much, as I don't see any human centipedes or body-fluid-soaked religious icons, but given that you're ultimately meant to consume the contents of the bottle, that may be for the best.

Instead, we're given 18 diverse designs, any of which would be a welcome addition to a grown-up liquor cabinet. In other words, you've come a long way from the gleaming towers of the Popov bottle, and it's still more acceptable in polite company than the vodka brand that advertises how you can turn their bottle into a bong. Look, your evening's still going to end the same way, but at least now you can say it started with a little bit of culture.

No word yet on when these bottles will be available for purchase on American shelves, but we'll keep you posted.

[video via, photos via]