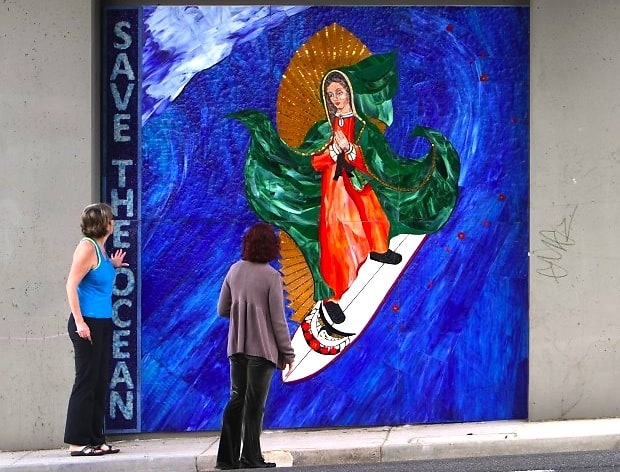 When 58-year-old Mark Patterson, a self-proclaimed "free-ranging spiritual thinker", of San Diego mounted his 10-ft mosaic of the Virgin Mary shredding like a pro on an Encinitas railroad bridge, the message was not meant to be religious. He was just trying to get people to "wake up" and save the ocean, man. Dubbed Surfing Madonna by locals, the masterpiece of Our goofy-footed Lady riding the gnar was unfortunately removed this week by the city. 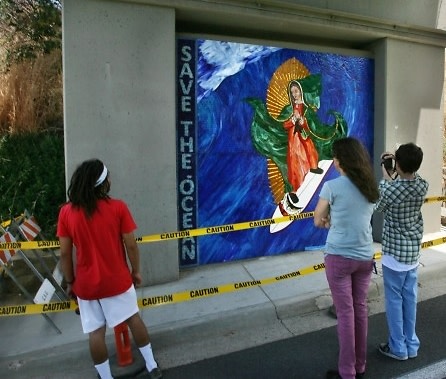 With its mission statement, "save the ocean" scrawled down its left side, the artwork was intended as a call to preserve the world's oceans in crisis. But its apparent craftsmanship and environmental statement was not enough to save it from being categorized as common vandalism in the eyes of the city who deemed it illegitimate street art for which Patterson was fined and ordered to cover the cost of removal. Despite the beach town community's affection for the work and the Facebook campaigns to keep it from being taken down, a crew carefully disassembled the mosaic this week so as not damage the artwork.

It took Patterson nine months to create the mosaic, and only two months for it to be removed from the bridge he'd always driven past and considered the perfect spot for the piece. Maybe you missed it in its original setting, but you will eventually have the opportunity to see Mother Mary getting totally tubular when Patterson dude finds a new, legal public place to display it. We'll keep you posted on that, but until then, hit the beach and do your best Holy Virgin on some sick bitchin' waves.