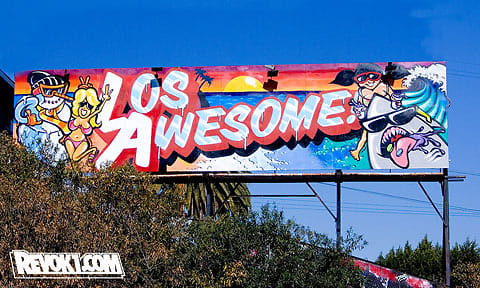 Despite the honor of having his work currently on display in MOCA's much buzzed about and controversial graffiti showcase "Art in the Streets", local street artist Revok is anything but a celebrated champion of the arts in the eyes of the judge who just sentenced him to 180 behind bars.  The law caught up with Jason Williams a.k.a. Revok while trying to board a plane destined for Ireland out of LAX last week for failure to pay the court-ordered restitution as part of his probation to his victims in previous vandalism charges. [Photo via]

Today the judge found Revok, one of the most highly-regarded in the street art world, to be in violation of his probation and sentenced him to six months in jail while the L.A. County Sheriff's Department investigates "other incidents of vandalism" prompted by evidence discovered during his arrest last week. Very interesting timing for his arrest--amid controversy over the "Art in the Streets" exhibition that the LAPD and Sheriff's Department have expressed concern and disapproval of for its glorification and promotion of tagging. With such a high-profile figure in the graffiti sphere, bail set at a cool $320, 000, and the context in which this is all taking place, it's very clear Revok is being made an example of and his arrest to send a message to the masses that taggers will pay. 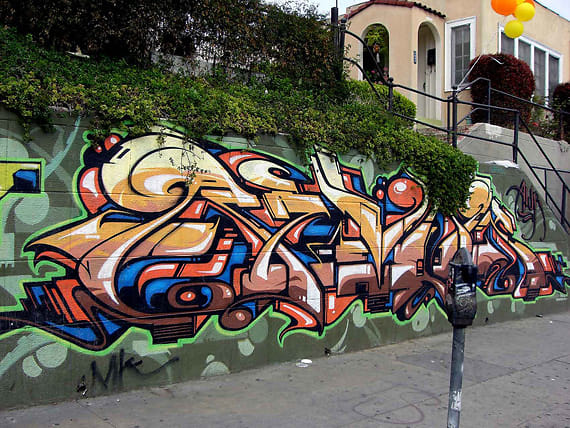 [Photo via] Except the only message we're actually getting from this is when the LAPD is on the losing end of a battle and feeling kind of impotent, it will cheaply swing its dick in the other side's general direction like an angry ape beating its chest thinking it's triumphed.