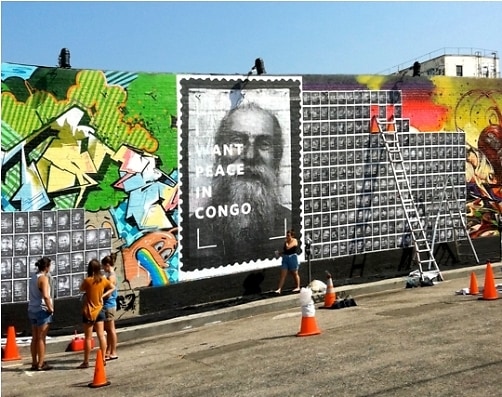 The embarrassment Falling Whistles is currently experiencing at the moment after realizing the wall they chose to canvas this week with their new campaign happens to hold a cherished, internationally recognized mural done by artists from across the globe must be overwhelming. It's one thing to make a public mistake, but it's another when it's, like, 30ft tall and is so long that I can't give a real estimate since there isn't a wide enough shot to fit the entire thing.

In an effort to raise awareness for their cause to end war in the Congo, local non-profit Falling Whistles (remember they did that Fashion's Night Out party at Curve?) decided to make their message heard on a grand scale and scouted a wall in L.A.'s Arts District on which to display it. They thought they'd found the perfect spot at 2nd and Garey to launch their campaign and pasted images of hundreds of faces of those who stand for their cause, side by side. In doing so, they unwittingly defaced one of L.A.'s most famous murals by covering it with their message. 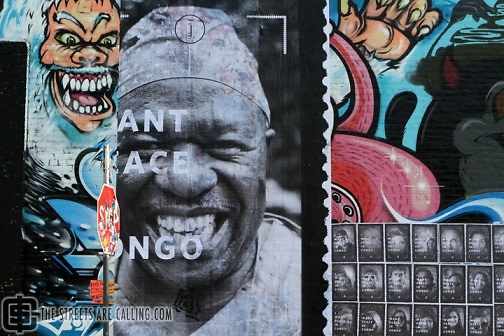 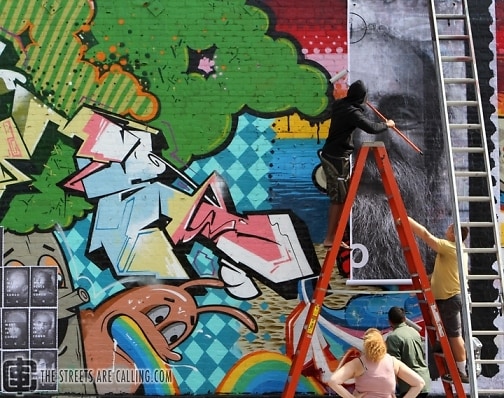 The mural, "Only Time Will Tell," was a collaborative project done by internationally recognized, professional street artists from around the world, including L.A.'s own Revok. It held special significance to the art community, and was one of L.A.'s best-known and most-cherished street murals, especially in light of the recent municipal moratorium on street murals.

As expected, Falling Whistles' egregious stunt got the backlash of a lifetime as the Twitterverse and blogosphere erupted with outrage over the destruction of a beloved piece. Falling Whistles is obviously mortified and its director, Sean Carasso, posted a major mea culpa on its site this morning humbly apologizing to L.A., artists, and anyone in the world that might be offended by his organization's remarkable faux pas. Then he climbed into the hole in the ground his supportive friends dug for him while he stayed up all night writing drafts of his apology, curled into the fetal, and is just gonna chill there for a bit til we've found another thing to be really pissed about. Shouldn't be too long, buddy. 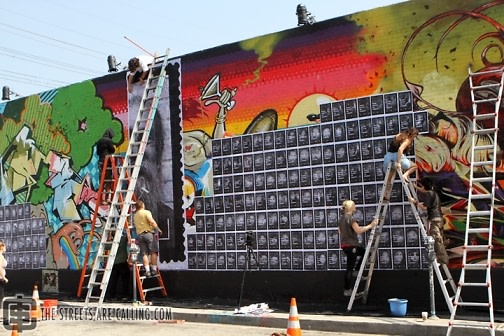 [Top photo via, all others via]