The official debut of The Getty's Pacific Standard Time project, a comprehensive study of the rise of Los Angeles' art scene, is still weeks away. But with this video of Anthony Kiedis and Ed Ruscha cruising the city's familiar streets, we get a small taste of what to expect.

As a metropolis built out of desert nothingness, Los Angeles has always been first and foremost a city of artistic freedom and creativity. This is the contention of Pacific Standard Time, a massive area-wide celebration of the booming 1945-1980 emergence of the LA art scene, organized by the powerful art junta of The Getty Trust. While the full slate of events and exhibitions (with basically every art gallery, museum and public location in Southern California participating) doesn't officially open until October, the project is already stoking public anticipation with some early festivities and releases, including the above video of Red Hot Chili Peppers frontman/SoCal bard Anthony Kiedis and pop art legend Ed Ruscha driving around the city and discussing the finer points of creative inspiration. 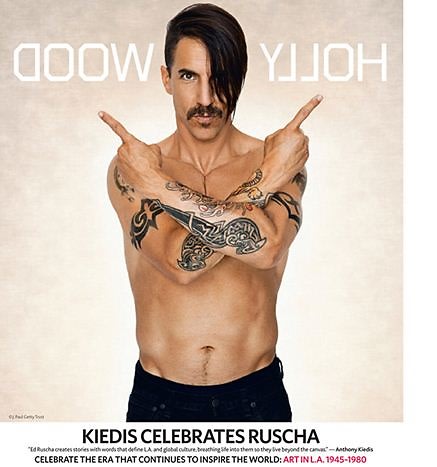 Of course, neither Kiedis nor Ruscha need to establish their Los Angeles bona fides; Ruscha has been living here since the sixties and many of his most famous paintings, drawings, prints and photographs have been influenced by the landscapes, buildings and visual language of L.A., and RHCP makes a decent run at The Doors and Guns N Roses as the band most associated with our city. The conversation documented between Ruscha and Kiedis is a fun, rambling rumination on the mysteries of creativity that manages to highlight how the diversity and size of the city can bestow all forms of inspiration.

While, as we mentioned, the full slate of activity doesn't kick off for another month, there are already nine exhibitions in full swing, including a celebration of influential Chicano collective Asco (at LACMA) and found-object sculptor and community organizer John Outterbridge (at LA><ART). We'll be checking those out, and eagerly awaiting the many events, guests, and collections to come.

[video and photo via]