I don't want to make you guys feel left out, but I got something very special in the mail yesterday. Ok, ok, I really didn't want to brag, but apparently I could get the lowest APR ever if I apply for a CapitalOne card. You're jealous, I can tell. Unfortunately I'm still waiting another important piece of mail, my invitation to Kim Kardashian and Kris Humphries' wedding, but now that invitations have started to pop up in the mailboxes of Hollywood's elite, it's only a matter of time before I get mine. Right? I can even use my new credit card to pick them up a $7,000 vase!

According to TMZ, which might have stolen my invite right out of the mail now that I think about it, the wedding is set to take place August 20th in Montecito, best known as the home of a freaking buttload of celebrities, and also Billy Baldwin. As you can see on the invitation, Kris and Bruce Jenner have spared no expense, going so far as to commission Lehr & Black to design a monogram logo for the couple that only vaguely looks like a high-end white supremacist design. Obviously, Ray J could produce a videotape that proves conclusively that Kim's no racist, but I digress. 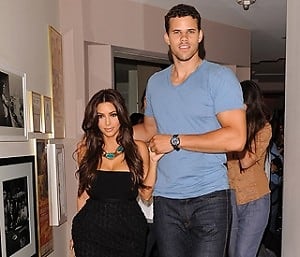 Though while we're on the subject, Kris, buddy, how are you going to marry someone who has a sex tape? Most guys have a hard enough time dating a girl that's simply slept with someone else they know, but I can't fathom being cool with knowing that someone out there, right now, is on the internet watching your wife getting peed on by a marginal R&B singer. And even beyond that, the other athletes she's slept with, athletes who in some cases actually get playing time on their respective teams? I just feel like no matter how deep down you buried those feelings of jealousy, anger, shame, whatever, there'd be way too many triggers floating around in your day-to-day life. You'd be happily flipping channels, minding your own business, when all of a sudden Reggie Bush would be selling protein shakes on some commercial and you'd want to kill yourself. Am I off base here?

Regardless, this thing is going down, August 20th, and I intend to be there. It's Black Tie, so I'm going to have to get my tux dry-cleaned, but there's no sacrifice I wouldn't make for these two crazy kids. So where's the honeymoon? I hear Daytona Beach is lovely this time of year.

[invite via TMZ, photo via]