It's difficult to swallow the humble beginnings stories of hot A-list actors (i.e. "I wasn't popular", "I never felt pretty-I was just skinny and awkward" puh-leeeze!), but something tells us James Franco isn't romanticizing about his pre-fame odd jobs or running an illegal cologne ring from his middle school gym locker.

Before landing the role of Daniel Desario on the short-lived but much-celebrated "Freaks and Geeks", Franco was a Palo Alto middle schooler with a crooked business model as a locker room pusher of sorts. In an interview with James Lipton which airs on "Inside the Actors Studio" tomorrow night, he describes his initial foray into illegal activity as a junior high student:

"I guess my life of crime started by stealing cologne. We'd keep [the cologne sample bottles] in the locker, in our gym locker at school and we'd sell some from the lockers."

Scandalous! As strange as his adolescent entrepreneurial endeavor was, given Franco's propensity to go against the grain and stray from the beaten path (he's currently enrolled in MFA programs at NYU and Columbia and has no problem dressing in drag for Terry Richardson), it's not all that surprising.

Later, as a struggling actor and UCLA dropout, Franco had to make ends meet and took a job at McDonald's where he reveals he found a way to practice his craft,

"In the drive-through window . . . I would practice accents."

So that really hot guy who asked what kind of sauce you'd like with your order during a late-night fast food run you later recognized as James Franco but then dismissed because he had a foreign accent, was in fact James Franco. 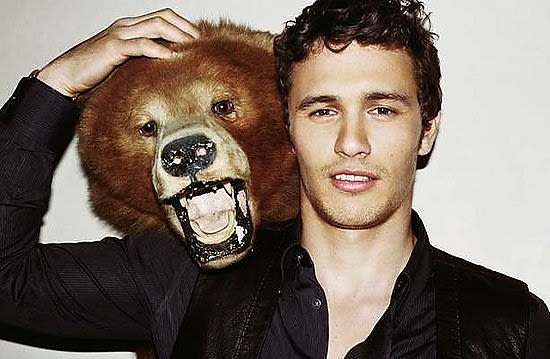