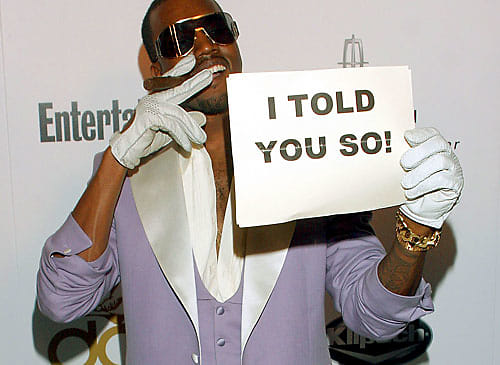 In case you didn't have a Google Alert set for "Kanye West + Hitler," you might have missed the latest salvo in the admittedly talented rapper/producer's attempt to do something so mind-bogglingly obnoxious that the universe instantly collapses in on itself. Performing this weekend at the Big Chill music festival in the UK, Kanye embarked upon one of his signature "I'm so brilliant and misunderstood" whines, which culminated in an extraordinary moment. [Photo via]

You see, to hear him tell it, despite five straight Platinum albums and a level of critical and commercial success almost unparalleled in hip-hop, Kanye is actually even more brilliant than you realize. In fact, his brilliance can never be understood in its own time. It's sort of like that other brilliant guy who wasn't appreciated in his day, what was his name again? Oh yeah, Adolf Hitler, that's right! Via TMZ: 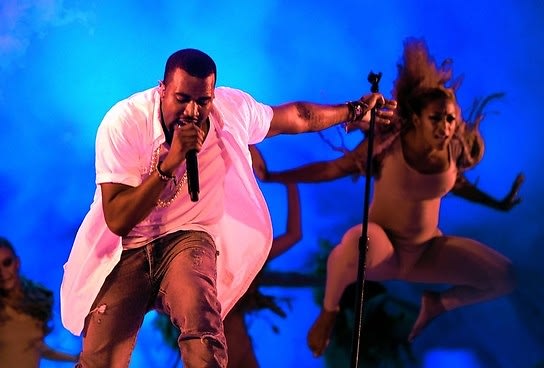 "I walk through the hotel and I walk down the street, and people look at me like I'm f**king insane ... like I'm Hitler. One day the light will shine through and one day people will understand everything I ever did."

[Kanye West performs at Big Chill 2011 photo via] Now, someone looking to deal with this comment in a fair and objective manner could probably see that these are two separate, if typically jumbled thoughts. But perhaps the simplest rule in Public Speaking 101 is to never, ever, ever use "Hitler" and any conjugation of "misunderstood" anywhere near each other in a sentence. Really, unless you're giving a lecture on World War II, it may just be best to keep Hitler out of your dialogue altogether.

But this is just a drop in the ocean of confusion that is Kanye West, so how does this stack up to the douchiest moments of Kanye West-ery thus far? Let's crack open the old Douchecyclopedia!

Kanye Drives a $1.7 million Supercar to a Charity Event 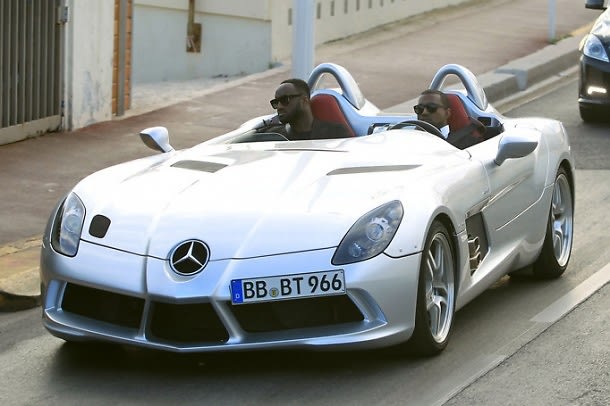 $1.7 million isn't going to cure AIDS, but it certainly wouldn't hurt the research, either. Nevertheless, Kanye elected to show us another, slightly more self-indulgent use for that kind of scratch this May, as he cruised up to the amfAR Cinema Against AIDS event in the Cap d'Antibes in a Mercedes McLaren SLR Sterling Moss, one of 75 such multimillion-dollar supercars in the world.

Now, like a lot of supremely obnoxious Kanye moves, this is less about the display of his legitimately-earned wealth and more about the lack of sense in when and where said wealth is deployed. And there are very few circumstances where you're not going to look flashy showing up in a car that costs as much as roughly 22 fully-loaded Toyota Carollas. Also, I heard he only tipped the valet a buck. That last part is a lie, but would you be surprised? [photo via]

Of course Kanye was going to appear on "Entourage", but do you realize that in the process he created what can only be thought of as a piece of genuine existentialist cinema? Here's the logic: in yet another bullshit, meandering "Entourage" plotline, the "problem" of Vince and pals not being able to get to Cannes is solved when Kanye himself offers to fly them over in his private jet. In other words, Adrian Grenier, Jeremy Piven and Kanye West were all on board a private luxury jet to the south of France, and it did not get hit by lightning. In other words, in the "Entourage" universe, God clearly does not exist.   [clip via]

Kanye Will Let You Finish

Well, we all know this one, don't we? At the 2009 VMA's, Kanye grabbed the microphone from Best Video winner Taylor Swift and delivered a semi-coherent rant ostensibly in defense of Taylor's competition for the award, Beyoncé. Now, aside from the fact that Beyoncé is perfectly capable of speaking on her own behalf, this was a supreme act of unabashed douchery. There are lots of great reasons to disrupt the VMA's: you're drunk, you're bored, Limp Bizkit is accepting an award, etc. In fact, 9 times out of 10, disrupting MTV's obnoxiously slick and yawningly safe awards show would make you look better, not worse.

Here's the problem: that one out of ten time that you shouldn't interrupt the show is when a 19-year old girl is accepting her first award. I couldn't give two shits about Taylor Swift, and if she never wins another award or makes another album, I won't lose too much sleep. But in taking away her moment, and pretending that he did so in order to pay tribute to Beyoncé, Kanye made it abundantly clear that, as with all things, this was All About Kanye West. [video via]

Kanye Puts Himself On A Watch, In Diamonds 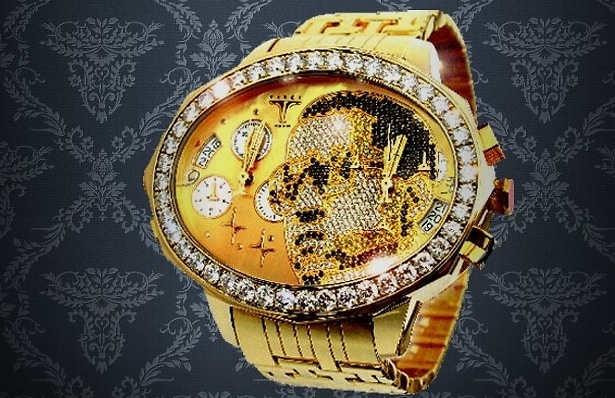 At what point does your horrifyingly excessive lifestyle become self-parody? I guess we'll find out soon enough, as Kanye seems intent on pushing that limit. Earlier this year, he dropped $180,000 on a timepiece featuring "8 karats of yellow, black, brown and white diamonds in the shape of his own face (with glasses!)", at which we can simply sit in awe. It's one thing to drop major dough on a bling piece so flashy and dumb that it's almost an inside joke, like Gucci Mane's infamous Bart Simpson necklace, and perhaps in the hands of another rapper that's how this would come off. Instead, because it's Kanye, you get the feeling that he has no such sense of irony, and that this is more like an exercise in self-idolizing iconography, that will soon be accompanied by a statue of himself, or perhaps his own currency. We'll have to wait and see. [photo via]