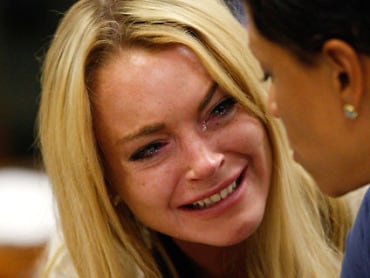 Lindsay Lohan weeps in court as the judge announces her 90-day jail sentence.

It was the screechy sob of desperation heard round the world as Lindsay Lohan's fate was announced in a Beverly Hills courtroom today. In case you're one of the few who didn't put life on hold to catch the live stream of her hearing and instead went on about your day, Judge Marsha Revel has sentenced Lindsay to 90 days in jail, followed by another 90 days at an inpatient rehab.

The sentence came after the judge deemed Lindsay had violated the terms of her probation stemming from a 2007 DUI in which she hijacked a car in Santa Monica and recklessly pursued her personal assistant's mother.  Oh, and she had some blow in her pocket. Lindsay took the floor as she tearfully begged the court to understand her side of the story -- that she believed she was "in compliant" with the terms of her probation -- but the judge wasn't buying it.

As it stands, Lindsay has two weeks before she must surrender herself in court for jail time at Lynwood (where Paris was sent), at which point her pesky SCRAM bracelet will finally be removed.

[Photo by David McNew via]