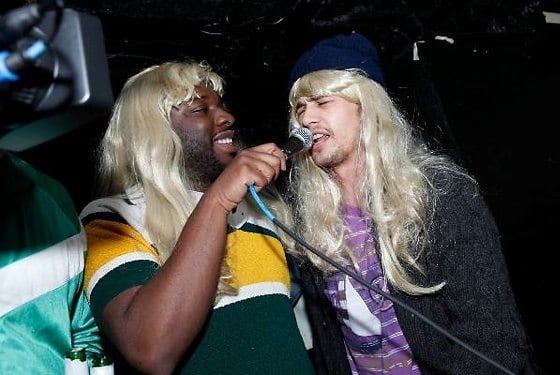 Apparently James Franco hasn't realized that absolutely no one is trying to compete with him. We get it. He has more feelings, is way deeper and more complicated than the rest of us, and is just on the whole a more evolved person—no one is even bothering to dispute that. But James is still pushing his one-man marathon in highbrow and trumps only himself in his latest artistic pursuit since dabbling in photography by shooting a gender-bending James Dean-inspired spread for Elle. Oh, and he also recently launched his Museum of Non-visible Art, which is exactly what it sounds like: a museum of the invisible world of thought, or what I like to call lofty pretentious bullshit. Thus far, he's covered that whole acting thing, gone back to school to get his PhD, taught a college course, had solo art exhibitions, and hosted the Oscars so naturally he's also in a band. [Kalup Linzy, James Franco photo via] 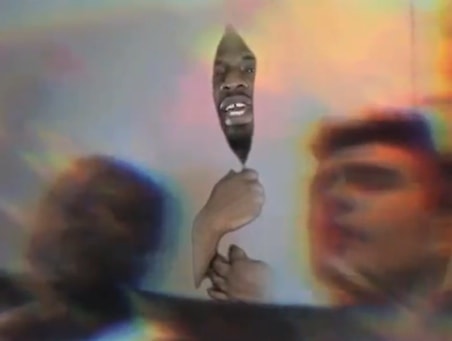 [Photo via] Of course, he'd probably correct you to explain that, "it's actually a collaborative project in sonic expression" with his Sundance karaoke in drag partner Kalup Linzy. Nevertheless, because James' breadth of abilities is so diversified, this endeavor is actually visible and happens to occur in the real, physical world. In about two weeks, James and Linzy will release their EP Turn It Up and I'm genuinely excited to hear it.

In the meantime, we have their very first music video for their single "Rising" to enjoy. The song itself is actually kind of good although there's hardly a discernible Franco presence. The video, however, is a low-budget joke. And is probably intended to be since this whole music thing has to be a stab at irony, right? It looks like a project a student going through their psychedelic phase did as extra credit for their hippie teacher, and there are some awesome moments like the floating wig, and the double-exposure effect with James' faint cheshire cat grinning face peeking through. Check it: