As we tweeted over the Thanksgiving break festivities, the almighty Google machine alerted us to a "leaked" Coachella lineup posted on the site StarzUncut.com. The validity of the flyer remains to be seen although we're not holding our breath as this is the first of many that we'll be seeing in the coming months as the speculation and rumors swirl. Nevertheless, we'll happily discuss anything that doesn't have to do with the holidays and all related sales/savage pepper-spraying incidents, and Justin Bieber.  So let's take a look at who this "anonymous source" has named as the top billed performers of Coachella 2012.

Before we begin, it's important to mention how people go about predicting Coachella performers. I'm not entirely sure of everything that's involved but I do know that one of the more reliable indicators upon which predictions are based is a look at the touring schedules of the kinds of artists who might be the type you'd expect to see at the festival. Coachella has booking rules (there are of course many exceptions) that state performers cannot play the L.A. market within roughly 30 days of the fest. So if an indie band is touring the U.S., has shows in other parts of California (or misses the state entirely), but is playing in surrounding areas and doesn't have any shows scheduled for the weekend of Coachella, chances are pretty good you'll be seeing them in the desert. 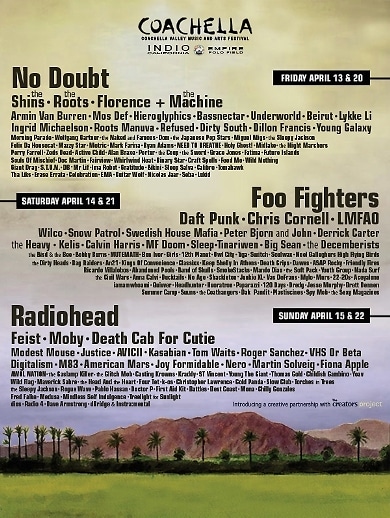 Now let's investigate the headliners and sub-headliners of this "leaked" bill...