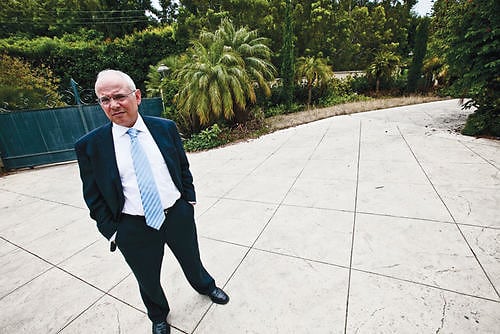 Except for bagels, public transportation, and watchable "Law & Order", we here in Los Angeles can do anything that our gigantic rival city on the East Coast can do. Including, it seems, gigantic Ponzi schemes. Meet Ezri Namvar, the "Bernie Madoff of Beverly Hills," whose conviction on fraud charges, house arrest, and subsequent overall fall from grace have all pretty much guaranteed that his kids aren't going to be selected for Ryan Seacrest's Persian "Jersey Shore". Way to go, dad.

Set up multiple limited-liability shell companies controlled by his relatives, and transferring his assets and his investors' money there to be used as a "personal piggy bank," Frank McCourt-style.

Supposedly only had six employees and recorded million-dollar deals with "the most rudimentary accounting methods, recording transactions in a simple ledger."

Like Madoff, promised all investors a well-above-average return, but then moved money around to cover immediate debts and refused payout to investors seeking to walk away. Is said to owe creditors over $1 billion.

Forced into bankruptcy by the courts and convicted on four counts of Federal Wire Fraud.

As one of L.A.'s proud Persian Jews, major donor to Persian-American, Jewish, and Israeli causes.

Has been photographed rocking a Madoff-style dark ballcap, the international symbol for "guilty"! [Photo via]

Rumored to have a bumper sticker on the $230k Mercedes that says, "It's not a bald spot, it's a solar panel for a sex machine." (unconfirmed)