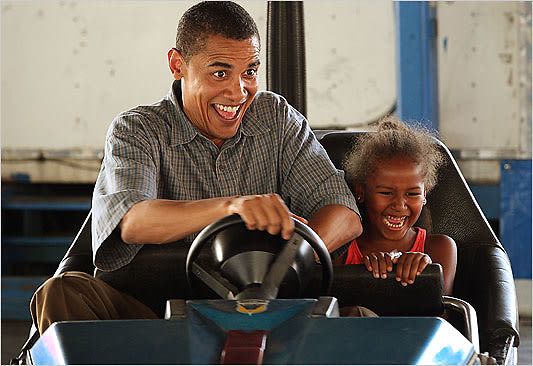 President Obama rolls into town for a pair of fundraising events today, and seeing as how we're fresh off of July's extremely over-hyped 405 closure, L.A. residents could be somewhat forgiven for taking today's warnings about traffic nightmares with a healthy grain of salt. But please allow us to remind you of previous Presidential traffic nightmares, and reiterate just how foolish it would be to drive anywhere near WeHo today if you don't have to. Keep reading for all the details and street closures.

The President is scheduled to get into LAX around 4:40 pm, at which point he'll head straight to the House Of Blues for a fundraiser concert. Featuring B.o.B., Adam 12, and the Gay Men's Chorus of Los Angeles and hosted by "Modern Family" star Jesse Tyler Ferguson, the show is completely sold out, but tickets started at $250 and reportedly went for as high as $10,000, so don't feel too bad. Of course, if this all sounds like pocket change to you, maybe you'd prefer the President's second fundraiser, which will be held right after the House Of Blues show (start time 6 p.m.) at trendy Melrose eatery Fig & Olive. Featuring a more intimate atmosphere, with the chance to ask the President face-to-face questions, this event carries with it a hefty pricetag of $17,900 per person.

So assuming you haven't coughed up a tremendous amount of cash to go hobnob with the Prez, let us reiterate: there is no good reason to try to drive in or around the Westside tonight. If you choose to do so, you can expect entire blocks of prime street parking to be turned into temporary tow zones, local access suspended on various cut-over streets, Sunset, Santa Monica, San Vicente and Fountain to be delayed and/or closed outright, and the kind of traffic in general that made Michael Douglas go on a citywide rampage in Falling Down.

Here, via KTLA, is the comprehensive list of directly affected streets.

So when you find yourself idling away half a tank of gas sitting in Century City somewhere, don't say we didn't warn you.