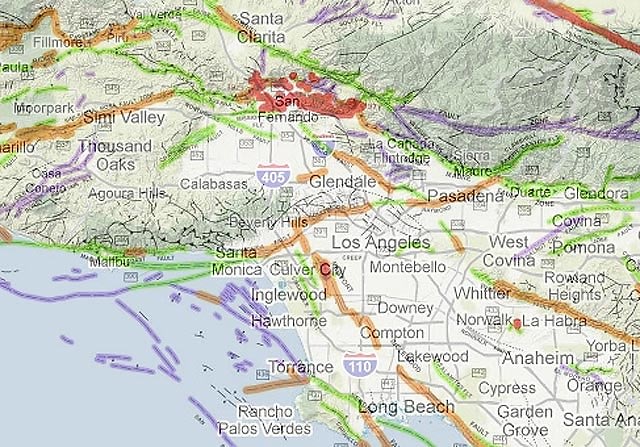 The worst thing about earthquakes are the surprise factor. We prefer our natural disasters with some lead time to prepare both physically and mentally, as is generally the case with hurricanes and tornadoes. Unfortunately there's no way to predict the exact day or time an earthquake will strike and scientists can only make loose projections of time frames and how strong the quake could be.

A little progress has been made in reducing the surprise now that you can access a map generated by the California Geological Survey which indicates the state's fault lines and their activity. The map shows that upwards of 50 new surface faults have been discovered in the last 20 years, ranging from small ones which we really don't need to worry about, at least not now, to large ones capable of causing 7.0 earthquakes.

Although scientists who study California's fault lines have been aware of the faults, they're releasing a map so we know too, which is great for precautionary measures like deciding where not to move to and where you might not want to go/send your child to school.  As for those who are already situated somewhere and discover from the map that they live a little too close for comfort to a fault, at least now you know and can make sure to bolt that large framed poster above your bed into the wall. And guys, you should really brush up your earthquake safety to prepare for the next big one because it's only a matter of time.