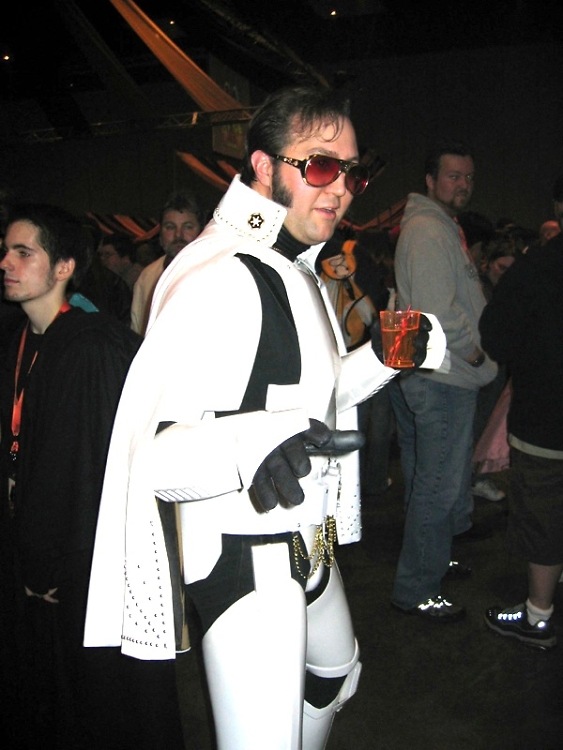 [Photo via] Most people think Comic Con is a just a long weekend getaway that comes but once a year where people go to dork out with each other. But there's more to this retreat to nerd's paradise in San Diego than you might think. It's not just about dressing up like your favorite sci-fi characters, super heroes and meet & greets with the actors who play them. No, no, Comic Con is a place for some full-fledged raging. The weekend is loaded with parties for you to get your freak on and our Official Party Guide To Comic Con 2010 tells you best ones to hit.  So pack up your light sabers, capes, and Spock ears -- it's time to do keg stands and makeout with some sexy stormtroopers, y'all!

Thursday July 22, 7:30pm-9:30pm: Threadless is an awesome spot for finding the best tees around. Guests can expect a first look at what designs they have coming up at the Industry Showroom. The event is free and you can even win some cool stuff. RSVP and early arrival is strongly suggested. -

Thursday July 22, 8:00pm-11:00pm: Check out the Marvel vs. Capcom 3 Comic-Con party with performances by Big Boi from Outkast and DJ Rocky Rock.

Thursday July 22, 9:00pm-11:00pm: Celebrating Boom Studio’s 5th anniversary, this party requires no invite or RSVPs and is right next door to the Convention Center at the Hilton Bayfront. 21+

Friday July 23, 6:30am-8:00am: McHale will preform two stand up shows at Humphrey's Concerts By the Bay for the "Community" panel. Pre-purchasing tickets is suggested.

Friday July 23, 5:00pm- Saturday July 24, 1:00am: The massive USS Midway will be holding this event that includes both panels about harnessing Social Media and a huge party. Video mash-up artist, Mike Relm, will be DJing the event and celebrities such as Levar Burton, Tyrese Gibson, and Brent Spiner are scheduled to attend. Pre-purchasing tickets is suggested.

Friday July 23, 7:30pm-11:00pm: The makers of the hit PC game, "City of Heroes", are in town for their San Diego Comic-Con panel and throwing a party at the Hard Rock Hotel. There will be raffles and refreshments. RSVP suggested.

Friday July 23, 8:00pm- Saturday July 24, 1:00am: This pirate-themed event takes place on a full-size pirate ship replica and looks like a must-attend for any pirate fan. Pre-purchasing tickets is suggested.

Saturday July 24, 6:00pm-7:00pm: The Zombie Walk returns to SDCC for another fun and free event. All ages are welcome and you don’t even have to be attending Comic-Con to join in. People get awesome Zombie face-paint and travel the streets of San Diego in a giant pack.