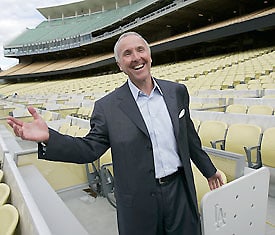 Apparently L.A. Dodgers owner Frank McCourt has a serious soft spot for law enforcement since he just gave each of the 10,000 LAPD officers four tickets to Dodgers games.  Despite being involved in a notoriously contentious divorce from soon-to-be ex-wife, Jamie, with millions at stake, not to mention the funnel of cash flowing straight into those legal proceedings, McCourt seems to still be in the spirit of giving.

His generous donation of 40,000 tickets to our very own LAPD holds a value of $1.25-1.5 million.  If you're planning on going to games on on September 17, 18, 19, or October 1, 2, and 3, bear in mind the heavy plainclothes police presence.   Being drunk and obnoxious in public is most of the fun of Dodgers games, but it's not worth getting arrested over. And no one wants to be the guy sending the "guess who just got banned for life from Dodger Stadium" texts.

It's nice to see that McCourt is putting his fortune towards causes that are at least charitable, and throwing it away on a Russian rent-a-mystic Rasputin character hes been shelling out a generous stipend to for the last five years in exchange for having him will Dodgers victories.