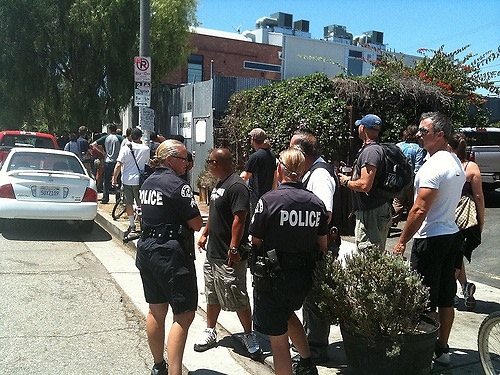 There are several reasons why one might expect to see a cadre of armed, bulletproof vest clad police swoop into one's place of business. A sophisticated prostitution ring, for example, or maybe a brutal dogfighting operation. Basically, any illegal, organized activity that exploits and hurts the innocent and poses a risk to the public at large can't be too surprised if a SWAT team kicks down their front door. So when a whole ton of cops swept in on Rawesome Raw & Organic Foods in Venice, it might be appropriate to speculate that they were maybe selling raw heroin. But, well, nope. It was milk. Raw milk. Great job, team!You see, it's illegal to sell raw (unpasteurized) milk without a permit, because according to California regulators cited in the Forbes writeup,

"there is scientific evidence linking disease outbreaks to raw milk. The milk can transmit bacteria, which can result in diarrhea, dangerously high fevers and in some cases death."

So is it possible that the correct response isn't to arrest these guys, but just to make sure that they pass out Shreddies with every purchase?

Now, other bloggers from all ends of the political spectrum have decried this raid, wondering why raw milk distributors get raided for posing a danger to the public when tobacco companies and breweries and manufacturers of all sorts of other products that are scientifically linked to death and danger operate normally. And I don't disagree, but I'll get even more specific: Hey California, if you're really serious about raiding the distributors of foods that lead to diarrhea and dangerously high fevers, why is Johnny Rockets still open? Because I ate at that place once, and oh man, it was rough. 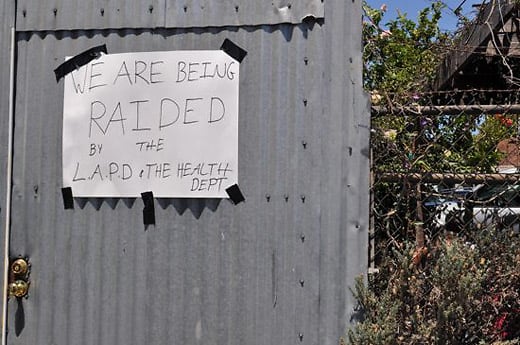 [Photo of a sign posted on Rawsome shortly after the raid began photo by Amy Scattergood for LAW] But this is how our Police Department (or possibly the Feds, there seems to be some confusion over who was actually in charge of the raid) have opted to deploy their taxpayer-funded resources, so I guess there's not much that can be done, at least in the short term. Still, like a lot of other people have noted, it really doesn't seem to me that anyone had to go to jail over this. Furthermore, according to the Forbes piece, Rawesome is a private, members-only club that technically serves as a "drop-off point" where "[p]rivate individuals pick up privately distributed food from local farmers," so there may be more legal wrangling to come over whether they actually needed a permit or not.

Finally, there are three other things that bother me about this story:

1. A large contingent of cops raid a raw organic market in Venice and the only illegal thing they find is raw milk? I'm pretty sure you can't even go to the Baja Fresh in Venice without stumbling over a bag of weed.

2. The milk in question was reportedly goat milk. Is this really the way the city re-pays its hardest working employees?

3. There are reports that the cops dumped over $10,000 worth of raw milk at the conclusion of the raid. Do you know how hot it was yesterday? And you just dumped all that milk outside? Now, you tell me whose actions posed more of a danger to the general public. Because if I were walking outside in Venice yesterday in 80° weather and the smell of $10k of raw milk hit my nose, there's a very good chance I would be on life support.

[top photo and video via]