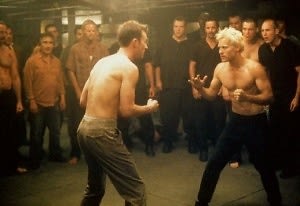 For anyone who lives or works in West Hollywood and Hollywood, the Weho Daily Twitter feed is something of a must-read. With a commitment to reporting only the most ridiculous or relevant happenings, WHD is your first source for news with a direct impact on what's happening right outside your door, like the major traffic delays on Santa Monica Blvd. caused by a downed traffic light at Curson. Well, that or the massive "transient fight club" causing a disturbance about an hour ago at Franklin & Wilcox. Do you ever get the feeling other cities don't have these problems?

Now, just to be crystal clear, we at Guest of a Guest in no way, shape or form advocate the exploitation of the homeless or awful, irredeemable material like "Bum Fights" videos wherein shitty, Joe Francis-like human beings use money to coerce desperate people into dehumanizing and dangerous stunts. We're very much not on board with that, and frankly, you're a horrible person if you are. But we're also not naive enough to deny that the streets have their own internal code of justice, which appears to be what was going down when we caught the following tweets from Weho Daily about an hour ago [all sic'd]:

@WehoDaily: transient fight club at franklin an wilcox - other transients are preventing people from intervening

@WehoDaily: additional person reported transient fight club to LAPD and says one of them my have a crobar.

@WehoDaily: LAPD is calling fire dept to franklin and wilcox but not for fight injuries... just drunk that I guess couldn't keep up when they scatter

Now, there's a few other tweets acknowledging that there wasn't much of an active fight going on by the time the cops rolled up, but I think we all know a proper fight club when we hear about one, right? Kudos, as always, to Weho Daily for effectively using a combination of crowd-sourcing and LAPD info to be the first to report this, and maybe if you were planning to walk down Franklin to the UCB Theater or La Poubelle, maybe avoid crossing under the 101, although really, you should probably do that anyway. And remember, if crowbars are outlawed, then only outlaws will have crowbars.