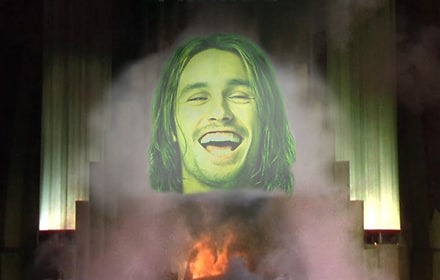 Everything James Franco does, from gender-bending photoshoots to reefer-soaked awards show emceeing, is part of a master plan to achieve the ultimate creative goal of a MacPEGOT (that's Tracy Morgan's infamous Emmy, Grammy, Oscar, Tony quest with a MacArthur Genius Grant and a Pulitzer tacked on for good measure). So when it was reported that Franco's newest project, which began filming in Michigan, is a super-budgeted 3D Wizard Of Oz prequel directed by Sam "Spiderman 3" Raimi, you might find yourself a little confused. Don't be. It's not for regular people to understand the ways of the Franco. The film, which will be titled The Great And Powerful Wizard of Oz, will co-star Mila Kunis, Rachel Weisz and Michelle Williams, and will tell the story of how the Wizard of Oz got to Oz in the first place. 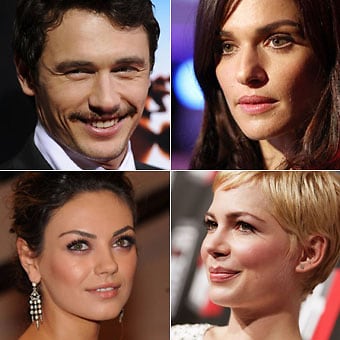 [James Franco, Mila Kunis, Rachel Weisz, Michelle Williams photo via] How is it that neither Tim Burton nor Johnny Depp are involved in this? This seems like just the kind of phoned-in, unimaginative "re-imagining" they should be so, so down with.

But Johnny supposedly turned it down, and in swoops James Franco. I can't say I blame him, as a Disney paycheck can buy you some really primo "creativity fuel," (right, Demi Lovato?) and also, I'd probably agree to star in Faces of Death if Mila Kunis was there. And hey, maybe it'll buck the trend of bland, CGI-lousy 3D snoozers. Just be careful, James; if this movie makes a billion dollars (like Alice In Wonderland did, if you can believe that), they're going to want to lock you into 3 or 4 more of them, and then how are you going to find time to write a novel about the Deep South or make a documentary about whale songs or whatever the fuck it is you do?

It's too bad "Oz" the TV show isn't still around. There's a role the James Franco I know could really sink his teeth into.