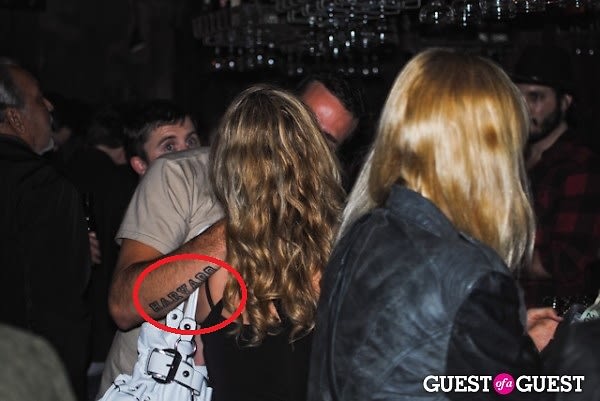 Idiotic displays of school spirit: a tradition as old as education itself! But while we expect a certain degree of inane chanting, light rioting, and tree-poisoning at our nation's state schools, the insufferable eggheads of the Ivy League have long hovered above it all, looking down their upturned noses at the disgraceful enthusiasm of the vulgarian set. They know that having real fun in college involves sophisticated pleasures, like the bawdy revelry of a good Chaucer verse or one or two, but never three, glasses of well-aged Port. A Man of Harvard would never lower himself to splashing the name of his fair alma mater on his body like some skanky plebe from BU, would he?

Until, sorting through our coverage of White Arrows + Huggy & Brian's Birthday Bash, we came upon this gem. What's the most surprising aspect of this picture: that someone smart enough to get into Harvard would be dumb enough to inscribe it onto his forearm, or that this blond girl seems to have been actually impressed by this? Maybe all incoming Harvard freshmen are inked up with a special tat that's only visible in the presence of $1 million cash or more? Winklevii, confirm/deny?

Hopefully, the explanation is something hilarious like this, and not just something boring, like it's a promotion for Harvard & Stone, where, full disclosure, this photo was taken. Because if that's the case, and promoting nightspots with ink is the new thing to do, there's probably a very sad, very hung over club rat sitting in Dr. Tattoff's waiting room right now with Drai's stamped on his forehead. Bet that wasn't worth the free lemon drop shots, brahh!