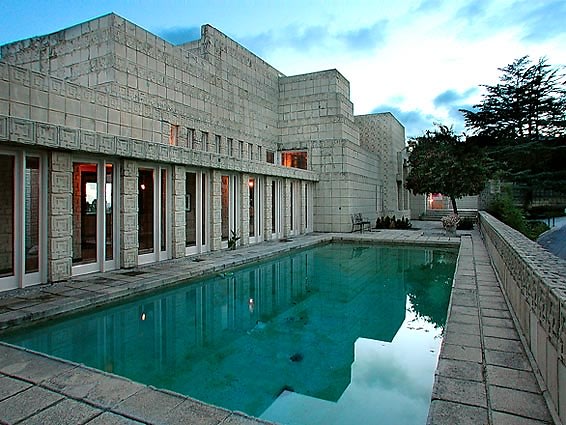 [Photo via] After sitting cold on the market for over two years, Frank Lloyd Wright's 12,000 square-foot concrete "textile-block" Ennis House in Los Feliz finally has a new owner in billionaire Ron Burkle. The Mayan-influenced landmark is one of the architect's most celebrated structures and was originally listed in June 2009 at an asking price of $15 million by its preservation group. Since no one was biting, Burkle just swooped it up for a measly $4.5 making him the Ennis House fairy godmother it desperately needed.

The stone mansion seems like the perfect setting for a 1920s Hollywood murder mystery, complete with concrete block columns on the interior. But the architectural masterpiece has seen better days, requiring extensive and pricey repairs and restoration after standard wear and tear and damage from the 1994 Northridge earthquake. That sort of baggage made the structure a hard sell and poor Ennis suffered through several price reductions, it's most recent at $6 million which Burkle negotiated down to $4.5 mil. 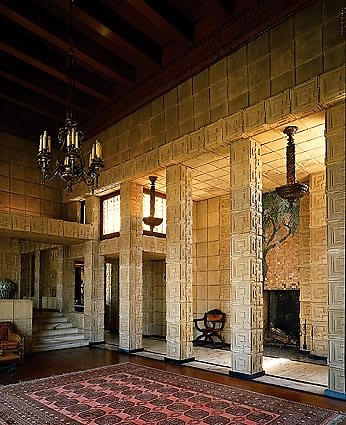 [Photo via] That price seems like a steal if you ask us, considering it's a landmark written about in textbooks and the largest of FLW's four "textile-block" homes. Burkle's net worth is estimated at a "conservative" $3.5 billion, so we're guessing that buying the Ennis estate was simply pocket change for Burkle in order to help out the Los Angeles Conservancy, which did not have the funds to support the home on its own. The Ennis House is not exactly livable, and isn't the sort of place we'd want to spend the night by ourselves, which is probably why the Conservancy had such a difficult time selling it. The 1924 house still needs tons of expensive restoration work, which Burkle has agreed to continue.

If you're dying to see this beauty for yourself, no worries—the house will be open a minimum of 12 days a year to the public per the terms of the sale. As a citizen of Los Angeles, it's nice change of pace when we hear stories about billionaires like Burkle who care about more than just their stock options and overseas bank accounts and have an interest in helping preserve a little piece of culture in this town. Next time I see Ron Burkle out and about, I'm giving him a hug high-five.

The old soft-hearted chump himself. [Photo via]