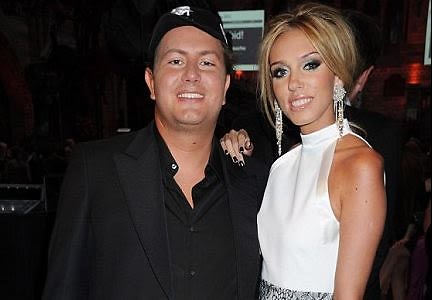 Apparently the Spelling Manor isn't the only bloated, tacky thing that Petra Ecclestone plans on spending the rest of her life around. This dashing gentleman on her arm is James Stunt, a 26-year-old "businessman" of some unspecified variety, who is due to marry the billionaire Formula 1 princess in an intimate, tasteful ceremony at a charmingly romantic 13th-century Italian castle later this year.

Wait, did I say the wedding would be intimate and tasteful? What I meant to say is, Petra's dad Bernie just hired the Black Eyed Peas to play the reception. Excuse me for a moment while I bash myself in the face with a claw hammer.

How wrong is this? Where do I start? Okay, this guy James Sprunt, or whatever, let's give him the benefit of the doubt and assume that he's a talented, self-made individual and not a "serial ladies' man and ambitious social climber," as one ex described him to The Daily Mail. And so what if he leers in every photo like a suspect from "Law & Order: SVU" and dresses like a professional poker player? He wouldn't be the first guy with more money than taste, and good on him for landing a big fish like Petra. As Michael Bluth would say, you gotta lock that down. Besides, if your dad looked like a decaying albino clone of Sir Elton John like Petra's dad does, you might have developed a thing for funny-looking men. I wish these two the very best, which they of course don't need to hear from me, because their lives are already full of money, tanning in St. Tropez, money, collecting $10,000 Hermes handbags, and also money.

What I can't abide by, however, is lining the glowing purple pockets of Will.I.Am with a single unnecessary dollar, let alone one million Pounds Sterling. Anyone who knows me knows that I consider BEP to be an abomination on par with genocide, and while my considerable efforts to classify them as war criminals has been met with inaction and indifference by the United Nations (big surprise), I'm not giving up.

We know Bernie Ecclestone is a student of history, so is he really going to subject a 13th-century Italian castle to the torture-pop of the Black Eyed Peas? Any European structure that old has witnessed plague, famine, Inquisition, war, atrocity, dictatorship, and countless examples of man's inhumanity to man. Are we really going to force those noble walls to now have to deal with "I Got A Feeling?" It just seems so wrong.

Maybe salvation can come from an unlikely source: according to the Daily Mail article, Bernie is only hiring Will.I.Am and Fergie, thus cutting out the other two members, Mohawk and That Asian Guy. Maybe they've finally had enough of being treated like second-class Peas, and they have some sort of revolt. Maybe they lock Fergie in a basement somewhere, and Will.I.Am gets extraordinarily renditioned or something. I know it's a stretch, but that Super Bowl halftime show sure felt like a terrorist act to me.

And on a side note, what do we as a country suddenly have against Italy? First Jersey Shore, now the Black Eyed Peas? On behalf of America: Italy, I'm so, so sorry.

[top photo via, James&Petra via, BEP via]