The NBA lockout and the possibility that there won't be pro basketball this season is bound to affect different players in different ways. For every civic-minded player that plans to build houses in the third world or run a camp for underpriveliged children, there's an angry man-child that's going to take out his frustration on the rules of civil society. 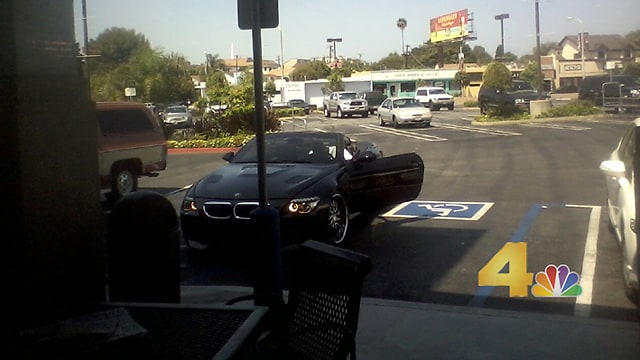 Oh, by the way, here's photos of Lakers center Andrew Bynum parking his BMW 650i across two handicapped parking spaces at the Playa Del Rey Bristol Farms earlier this week.

Now, I know what you're thinking– he misses at least 35 games a year, he must be legally disabled! Good guess, but NBC4 was on the scene to confront Bynum (click the link for video), and then to confirm with the California DMV that Andrew was not issued a Disabled Placard. That's some hard-hitting reporting, fellas.

Look, I've maintained for years that Andrew Bynum is a massively overrated, never-healthy/effective-when-you-need-him player, and his "bush league" cheap shot on  J.J. Barea at the end of the Western Conference Semis even had Kobe admitting he was "embarrassed." But I will say this: have you ever tried to park at Bristol Farms? Regardless of whether the parking lot is full or empty, that place is a freaking deathtrap full of decrepit old rich people hurtling around in their enormous luxury SUVs with absolutely no regard for human life. Maybe Andrew saw a 75-year-old Persian lady in a G-Class bearing down on him and had no choice but to swing into the closest spot. If that were the case, it would at least mitigate somewhat.