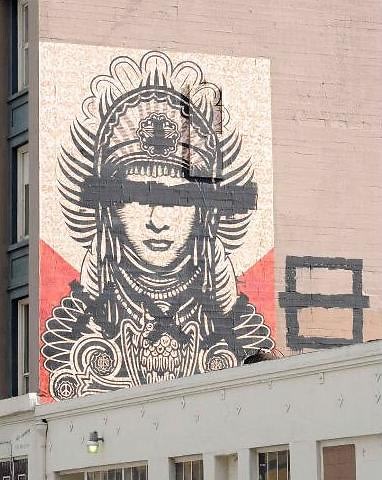 Street art is partly predicated upon rebelling against social mores. But when a graffiti artist ascends to mainstream fame, does his art lose its street cred or become less legit? Some artists who defaced a downtown L.A. Shepard Fairey mural believe so and think his overexposure is grounds for damaging the art.

A mural from November 2009 by the street artist made world-famous for his Obama "Hope" graphics was the site of the Wednesday vandalism incident. Fairey's "Peace Goddess" painted on a building near Wurstküche bore a black block across the figure's eyes and three large black "X" marks over her chest. It was the handiwork of two artists represented by R&R Gallery which is currently promoting an exhibition that features similar markings.

So how did the gallery feel about the vandalism to help bring attention to its current show? Owner C.W. Mihlenberger supports it and agrees "[Fairey's mural] was getting old." Whoa, watch out, Downtown, someone's swinging his dick around!

The mural is already on its way to being restored, a pricey project that will be funded out of pocket by Mihlenberger. He seems pretty shameless so having to pay for the damage appears to be the only thing this little exploit cost him. But now we all know about his art gallery's show so maybe it was worth it? 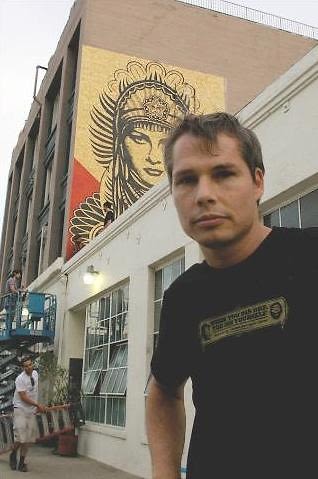 Shepard Fairey in front of "Peace Goddess" before the vandalism.