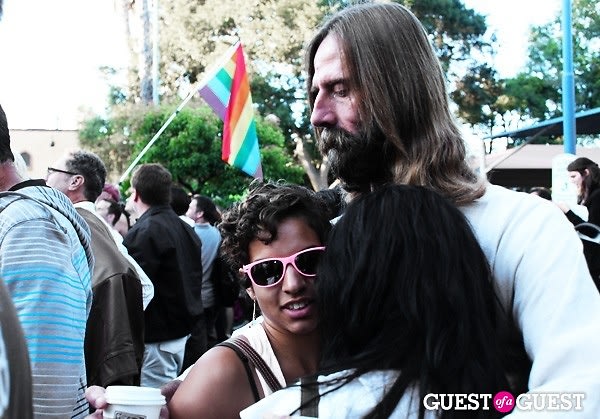 We thought something was up when we got notified late last night that an @ISawJesusInLA with a photo of the West Hollywood Jesus was now following us on Twitter, but the NyQuil had kicked in at that point. "Jesus knows how to Tweet? Makes sense. He's trendy like that," we thought as we dozed off telling ourselves we'd investigate in the morning. The WeHo fixture we all know as Jesus my indeed know how to Tweet, but our new follower was actually the account, and name of a new blog launched Sunday by Gretchen Schneider dedicated to him, reports Laist.  I Saw Jesus In L.A. is now your official forum for sightings of the tall, mysterious bearded man with bleached linen clothing spotted all over the bustling neighborhood. He seems to be everywhere and knows all the trendy spots to go to.

Schneider tells Laist she first saw him one night outside of Skybar, and the last two times we spotted him were at the Prop 8 rally in West Hollywood Park and in the parking lot of XIV on a Sunday evening (yeah, let's not talk about that night. In all fairness, we thought we were going to a civilized Michael Mina restaurant for some apps and cocktails. Little did we know...).

Have you spotted Jesus recently? Or want to know where else he's been popping up? Visit I Saw Jesus In L.A. for all your WeHo J.C. updates and inquiries.