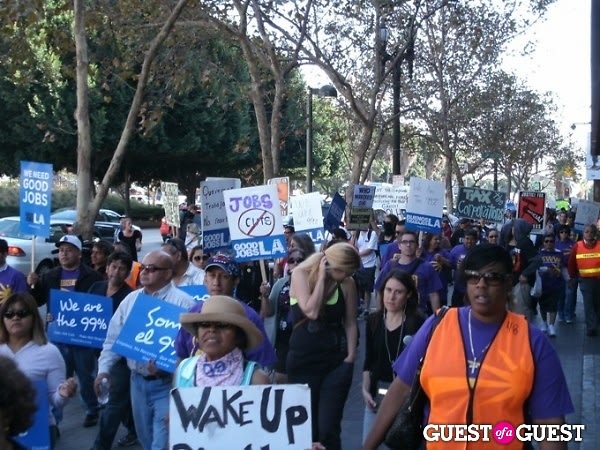 Go HERE for more photos of the march by Kyle Langan and tag yourself and your friends!

As we've been seeing on the front pages of national and local newspapers every day for the last two months, the Occupy movement has spread from Wall Street and gone coastal, rocking our own city for weeks downtown around City Hall. Today, as part of the "National Day of Action for the 99%," Angelenos stepped out in numbers for marches that shut down major city streets and we were there to capture the action (and weed vapors).

One protest took place at 8am, where local police officers were rumored to have been aggressive, while another began at noon, beginning on West Temple St. and North Spring St. just outside of City Hall.  Protesters flocked to the streets with their determination and creative signs, planning to march down L.A. city streets like Figueroa and Hope. 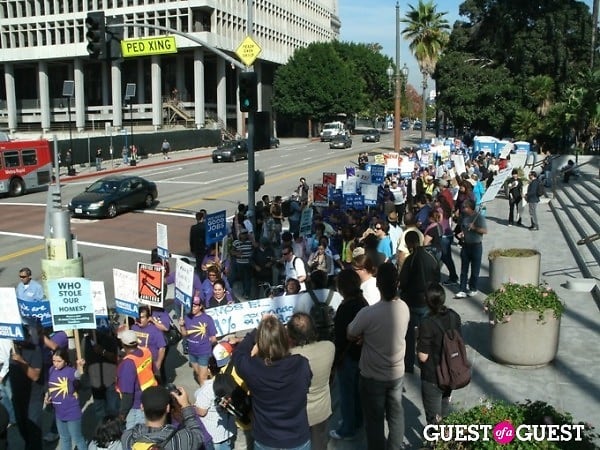 Basecamp for the demonstrators was setup lining the sidewalks surrounding City Hall, with what seemed like miles and miles of tents, picket signs, and body odor. Call me crazy, but my little nose might have picked up a scent of marijuana as well.  Hey, whatever keeps them focused I guess.

One thing was for sure, everyone who was there believed in the cause they were supporting.  From local janitors groups on strike, to lawyers, to the homeless, to those just wanting to be a part of the historical movement, the diversity was very apparent and brought with it a universal quality of closeness, uniting various socioeconomic groups together.