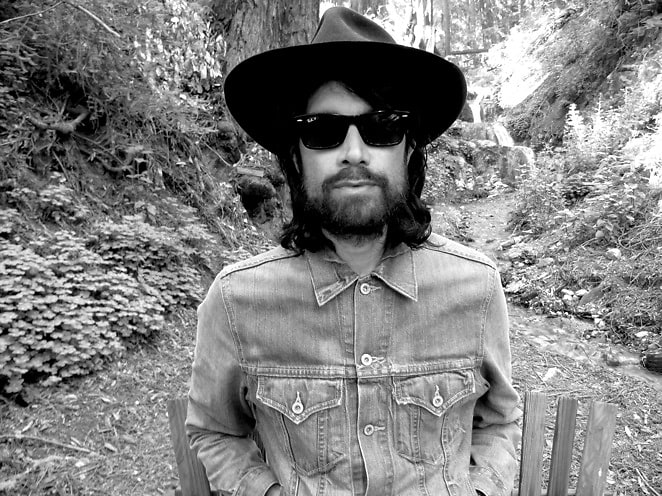 Maybe you recognize him as the man in black in the DJ booth at a party or club you were at. Or maybe you know him personally since that seems to be the case with most everyone in town.  But if you're still in the dark, Myles Hendrik is the man responsible for those unforgettable Friday nights at Teddy's we've been enjoying for years, as well as those wildly fun La Boum Wednesdays.

The native Kiwi has been shaping L.A. nightlife since... well, since I was old enough (almost) to get into clubs, and is known for his ability to attract the right crowd and unique prowess in avoiding L.A. "hotspots' " inevitable downward spiral into trashy scenes.  Oh, and his song selections make even the least likely get up and dance like maniacs.  I had the chance to pick Myles' brain and ask him all about everything from his formula for successful nightlife to his trademark black hat...

- EG: Why did you leave New Zealand? What brought you to LA? MH: I had band at home and we were doing pretty well. We did a small west coast tour of the U.S. and got some serious label interest, but no one in the band other than myself really wanted to relocate to another country. They all wanted to sign to a local label - albeit Universal - live comfortably with their girlfriends and tour the homeland. I felt strongly that we were selling ourselves short. The seeds of ambition had been sewn on that little U.S. jaunt and I realized that I had reached the point where I felt like I had done as much as l I could do in New Zealand.

A little kick up the proverbial arse was what the doctor ordered. I had tasted LA on that little tour and the inherent ambition and level of creativity excited me. Settling down at home just wasn’t in the cards. [cue "Beverly Hillbillies" soundtrack] 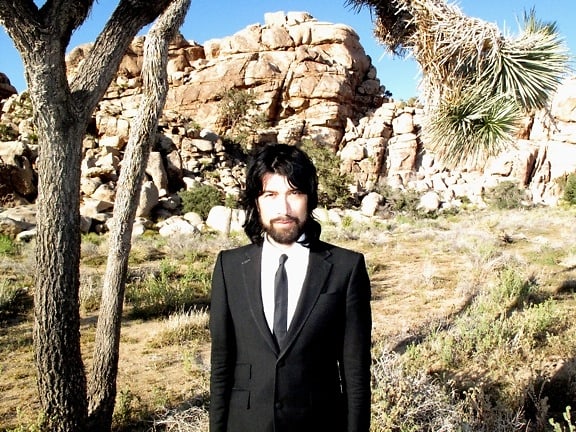 What do you love most about LA? Favorite things? The history, the amazing works of creative expression that are literally on every crack of every street. It’s inspiring, intoxicating. I DJ in places that Elvis once played, where Sinatra, Marilyn Monroe lived. I live on a street where Charlie Chaplin and Houdini had places, and where Charles Bukowski once begrudgingly delivered mail. My band’s practice space was once used by Orson Wells and we’ve played on the same stages as Joni Mitchell, Bruce Springsteen, Harry Nilsson. It just goes on and on… It’s mind-boggling.

And other things of note:

Most favorite: Being able to have breakfast at Local in Silverlake, then be in Malibu for a swim and then be in the desert at Joshua Tree high on a rock formation straight out of "The Flinstones" watching the sun set. All in the same day. Where else can you do that?

How did you get into DJing? I used to make mix CD’s for friends and one of them owned a bar and he liked my mixes. So he suggested it. If you can stitch together a thoughtful mix tape that flows and keeps your interest then you’re more than half way to being a good DJ.

What’s your philosophy/approach to nightlife production? You’re obviously doing something right, with several successful ventures (Vine, Teddy's, La Boum…) to your name—what do you attribute to that success? I have a fairly simple approach to this: I’m seventeen again and my friend’s parents have this great house and they’ve gone out of town for the weekend. Oh and they also happen to have a great liquor cabinet, nice furniture and the greatest record collection known to man. And my friends just happen to all be cool and like to dress up a little. That’s where I always start in my head as a jump off point. I want to make the greatest ‘house party’ that just happens to be in a club as opposed to a just another club party, party… or something like that.

So essentially I'm just try to keep the vibe as honest as I can and couple it with the best soundtrack. The music dictates everything and it will dictate the crowd. It’s pretty much the Golden Ticket. If the music you play is honest to you, it will be palpable to everyone and they will feed off of it. If it’s not, they will eventually see through the smoke screen. Anyone can play The Beatles into The Strokes and into De La Soul. But will they play it with conviction or will it come off like a fake vintage Nirvana T shirt from Macy's? (It won’t really smell like teen spirit)

What do you think is the biggest challenge for creating a successful night at a club? Trying to marry keeping it honest with making a buck or two.

How do you know it’s a good night when you’re DJing? If I have an interesting mix of great people that are allowing themselves to truly be out of their heads for a few hours - feeding off of the music and each other - then I’ve done my job.

“Cause we celebrating No More Drama in our life With a great track pumpin', everybody's jumpin' Going ahead and twist your back and get your body bumpin' I told you leave your situations at the door So grab somebody and get your ass on the dance floor”

What makes a good event/night spot in L.A., what are the necessary elements?

Necessary elements you ask… let’s boil this down to a recipe for a nice veggie stew shall we:

Start with a nice solid base of a great location. Let it simmer for a while, then add the major ingredient: the music (sublime, spicy and a little tart but always, always tasty). Then add a pinch of great door person, which will weed out the fat that no one wants in their stew. Garnish it all with a simple but great name and warm genuine hospitality and serve piping hot.

Do you think L.A. is a particularly difficult climate in which to cultivate a more sophisticated nightlife scene? I don’t think the climate is that difficult, and there are some great things going on this town that are sophisticated and cool. It’s just that to cultivate anything worthwhile and unique that possesses a modicum of taste, whether it be in this industry or any other, it requires some thought and originality. And that takes a little extra effort which sadly most people don't want to expend. There are always going to be more American Idol creations than there are Arcade Fires to put out.

Most promoters and club owners, especially in Hollywood are just in it for the quick buck so they stick to the formula of going after the same reality tv-lite celebs, with the same generic Power 106 playlist. It’s a no-brainer, but it’s soulless and not my cup of tea.

How would you describe L.A.’s social landscape and how would you say it’s different or unique from that of other cities? It seems like LA is following the NY trend a little in that there’s been a move towards hotel-based nightclubs. The only difference is that NY has more hotels with better club spaces. We really have only a handful, which is a shame. If only the Chateau Marmont had a room like The Jane in NYC. Then I could really do some damage.

What would you like to see happen for L.A. nightlife? Loosen up! Think outside the box! Play more Fleetwood Mac and Talking Heads! Put a premium on good music and interesting people. There are punters out there that do want more sophisticated choices so give it to them. And stay away from everything being bottle service catering for celebs and models wanting to hear Usher and Justin Bieber. (And PS: Stripper poles should be left in The Body Shop where they belong)

Who, in your opinion, is the best local DJ (you can say yourself!)? Worst? Oh there are many but to name them could be dicey. What if I left someone out? I don’t need to name names, they know who they are. [And good on you, you lot for flying the flag of good taste. It’s a small but necessary one].

Best promoter/club owner/ event producer you’ve worked with? Worst? Again a loaded question… but I will drop a few names for good measure and for thanks.

Med and the David’s @ The Roosevelt. [I did PASH! with David Heath], my sweet partner Ana Calderon, the people at The Avalon where we throw La Boum are ace. Jen Green, Geoff Renaud in NY. The Bowery Hotel NY people, Sean MacPherson… so many. I’ve been lucky. And so have they, let’s be honest. (Oh I kid)

Favorite event you’ve worked? So many, perhaps too many to mention. Coachella events are always great.

Events for Vogue, Phillip Lim, ones for Phoenix, U2, Flight Of The Conchords… Oh, and I went and played the Viceroy Anguilla for New Years which was a definite highlight. (Cheers Kelly and Brad)

What’s your typical day like? Try and wake up. Pet the cat. Attempt to answer a backlog of emails. Organize weekly parties. Attend to band affairs. Write new tunes. Finish old ones. Get together with the band. Pet cat. Try and remember to eat something. Cuddle my gal. Pet cat. Head out around 10… come home usually way too late and try to make the bed as opposed to a less than dignified collapse on the living room floor [an early morning favorite]. 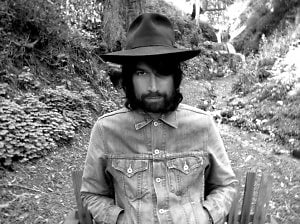 Where did you get your hat?! It comes complimentary to all foreigners when they give you your Green Card. That, and a copy of The Chronic. It’s all apparently part of the assimilation process or so it says in the ‘Welcome to the USA” literature they give to you. It’s come in quite handy I have to say. President Obama obviously has put a premium on fashion forwardness, and for that I thank him.

How do you decide what music to play every night? The crowd, setting, your mood, etc…? I’m in a fortunate position that I play mostly my own nights and get hired because of what I play. But I always try to mix it up, keep it interesting and fun. The crowd can perhaps ‘influence’ but they should never ‘dictate’ what is played, or else you’ll be playing bar mitzvahs and weddings faster than you can say "Jesse’s Girl".

Any local bands you know of that we should look out for? Beach House, War Paint, Best Coast, Chief, Local Natives, Avi Buffalo, Voxhaul Broadcast, The Bird & The Bee, White Arrows, Io Echo… there are so many good local bands right now

What’s happening with your band, Blood Cat Love? Are you guys still together? We've almost finished our second record and it’s sounding pretty sweet. It’s been a long time between drinks but we needed the time off to write and not keep recycling what we had done for the past few years.

As a result, the songwriting has developed and I’m excited for people to hear the fruits of our labor. It’s not just guitar, bass, drums, vocals anymore. There’s keys, synths, strings and horns… all sorts of interesting malarkey that we never did that’s expanded everything. It’s going to be really fun to perform live, I can’t wait.

Oh and we’re changing our name too, time for a fresh start. Watch this space…