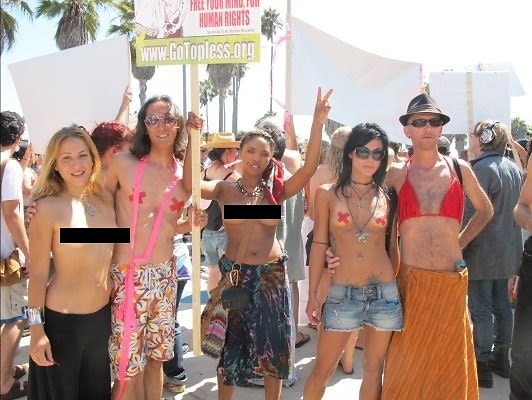 [Photo via] Yesterday, Venice went European-style the for the fourth annual Go Topless Day, an event wherein ladies expose their boobies to fight for their right to bare breasts. The cause may seem as simple as female exhibitionists wanting to flaunt their tatas freely in public—something wholeheartedly supported by men as roughly 60% of the straight man's life is spent trying to get women to take their tops off.

But the reasons behind the cause go a bit deeper than that, and are actually tied to the beliefs of a UFO cult who feel the unequal topless laws of men and women is one of the most critical of today's civil rights issues. Weird stuff. Personally, I feel if the law permits men with bigger breasts than myself who could seriously benefit from a bra to go topless—a sight 10 times more offensive than regular female breasts—then women should be able to as well.

Protesters gathered at Venice Boardwalk with signs, the females topless and men in bikini tops or with tape covering their moobs. During the boardwalk's extra dose of nipple, catchy calls to action chanted by protesters who marched down Venice Boardwalk included:

"Free your boobies, free your mind!"

And my personal favorite, "put the 'tit' back in 'Constitution!'"