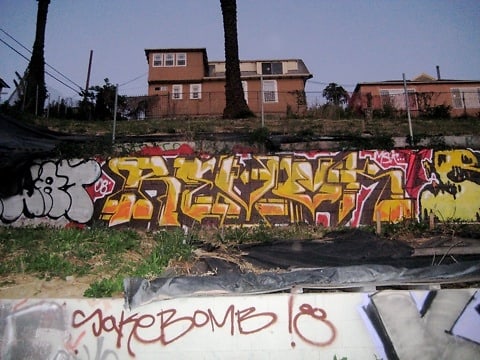 After all the confusion and debate as to the appropriate nomenclature for what is commonly referred to as the "eastside" of L.A., as in Silver Lake, Echo Park, Loz Feliz, and East Hollywood, Curbed has had enough and wants to settle on a new name that we can all use moving forward.

This domain is largely inhabited by hipsters who have scorned the Westside from which they probably came and will actually tell you to your face that they simply do not go west of La Brea.  They proudly refer to their turf as the "eastside", which is problematic because it's not.  There exists an entire region of L.A. further east of these parts, so what they really mean by "eastside" is east of the Westside. Are you still with us?

To address the inaccurate terminology New Angeles magazine has started referring to the "eastside" as the "the new Eastside" which is also problematic since A) the ACTUAL eastside hasn't gone anywhere and still exists, and B) it's not the eastside...

To resolve this once and for all, Curbed is holding a naming contest asking readers for suggestions. The winning name will henceforth be used to refer to the faux eastside.  Readers have been shooting in suggestions and a quick scroll down through the comments will show they are not taking this lightly. Here are some of the names in the running, many of which made us giggle:

Submit what YOU think this area should be called if you have any ideas so we can finally put this nonsense to bed.

What we want to know is whatever happened to "Camelot"?? Do any of you even remember when they were considering making the valley its own city, distinct from Los Angeles, and going to call it - no joke - Camelot? What do you guys think about calling this area Camelot because we kind of love it... CAMELOT FOR THE WIN! Runner up: Little Caucasia.